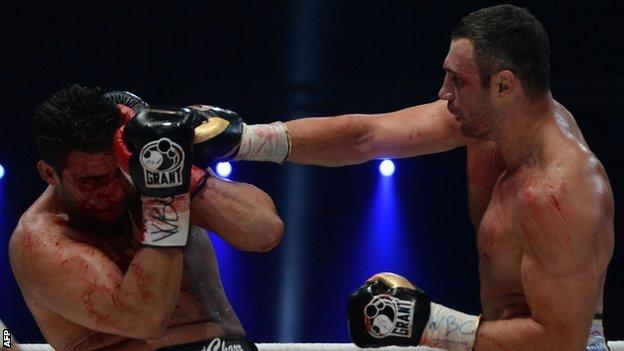 Klitschko, 41, was barely troubled by his previously unbeaten opponent.

The Ukrainian put the Beirut-born 27-year-old down with a slick right hook late in the second round.

And Charr, whose most notable victory was against Britain's Danny Williams, was stopped in the fourth with blood pouring from a cut above his right eye.

He reacted furiously to the decision - made by doctors who examined the cut - and protested the outcome to no avail.

Klitschko's last outing was a unanimous points win over Britain's Dereck Chisora in February, but the match was overshadowed when the Londoner and compatriot David Haye ended up brawling at the post-fight news conference.

Haye, who was beaten on points by Klitschko's younger brother Wladimir last year, went on to beat Chisora by knockout in July and has since pushed for a bout against the elder Vitali.

Whether that fight occurs will depend on whether Klitschko retires to focus on a political career.