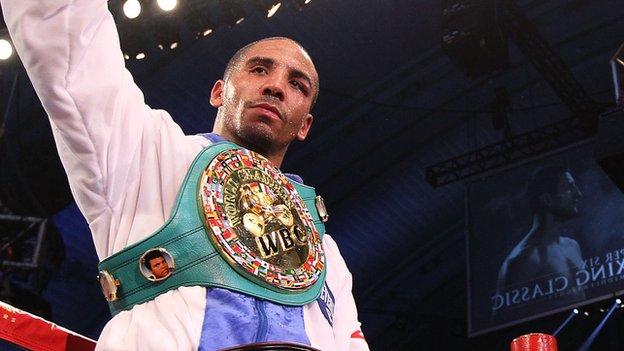 Andre Ward has called for no excuses from fellow American Chad Dawson after their super-middleweight showdown.

The 28-year-old, who beat Britain's Carl Froch in 2011, puts his WBC and WBA titles on the line on Saturday evening in Oakland, California.

World light-heavyweight champion Dawson, 30, has dropped down to the 12-stone division for the clash.

"I am ready, I know they're ready so there should be no excuses at the end of this fight," said Ward.

"It's a major fight for a lot of reasons but I approach every fight the same way. That is the major key to being successful.

"This is a big fight, but we have been in these positions before."

Ward outclassed Froch in December last year to claim the Super Six super-middleweight tournament and add the WBC title to his WBA crown.

Dawson beat ring legend Bernard Hopkins in April to claim the WBC light-heavyweight title, but believes he has to beat Ward to become a superstar after dropping down in weight for the massive showdown.

"I'm going into this fight knowing it is going to be a war," said Dawson.

"If I want to be on the next level with my career then I have to beat this guy.

"I want to be on top of the pound for pound rankings. I'm coming to do a job and the job will get done."