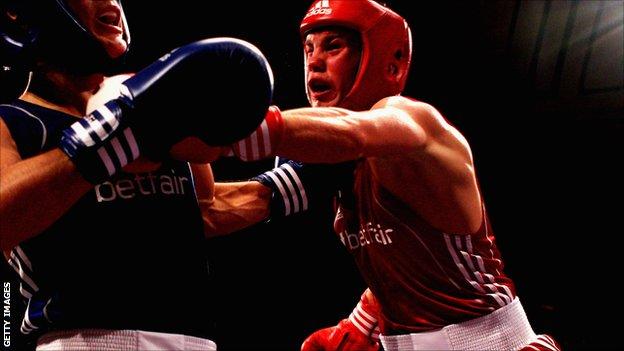 Ferndown boxer Iain Weaver says he is unlikely to make his professional debut on 20 October and is now set to fight on Carl Froch's undercard.

Froch defends his IBF super-middleweight title against Yusaf Mack in Nottingham on 17 November.

Injury ruled Weaver out of an 8 September bill while illness looks to have scuppered his chances of fighting on Kell Brook's undercard in October.

"I haven't had much luck in any circumstance," Weaver told BBC Sport.

Hopefully on 17 November you'll see me making my debut. For my first fight that would be a dream come true to fight on such a big night

Former Great Britain amateur star Weaver had been due to make his professional debut on the 'London Calling' bill earlier this month before he aggravated a metacarpal bone in his left hand during sparring.

"I was feeling mega sharp, I was sparring well, my weight was perfect, I was really fit, I was buzzing," he said.

"I was ready for a big night of boxing. I was looking forward to putting on a show and getting my name out there."

Weaver only returned to training on Monday 24 September - a week later than expected, after he picked up a bug and was laid low by illness.

He admits he has done very little road work so rather than fight semi fit on Brook's undercard on 20 October, he would prefer to target a place on Froch's bill in November.

"The hand feels okay, I punched with it for the first time on Monday," said Weaver, who is a qualified tree surgeon, and is now working part-time for his uncle.

"I didn't really punch with any force to be honest. I haven't done any road work, it's been a hard couple of months to be honest.

"So I'm looking at boxing on the undercard of Carl Froch's world title fight in Nottingham. If I can get on that bill that would be a huge occasion.

"Hopefully on 17 November you'll see me making my debut. For my first fight that would be a dream come true to fight on such a big night.

"It's going to be a massive crowd there and I want to show what I can do and get people talking about me."