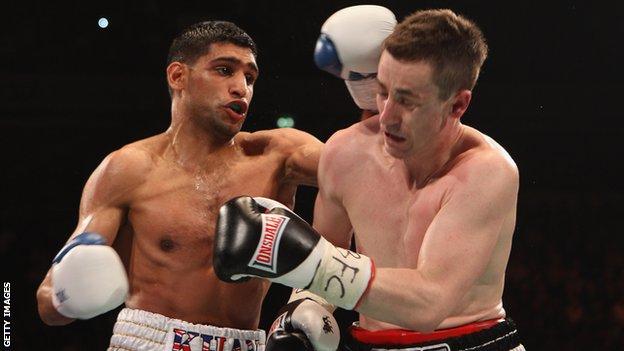 Paul McCloskey is being linked with a possible rematch with Amir Khan following contacts between the respective fighters' managements.

"Both parties are serious. The dates being mentioned are 8 or 15 December in Manchester," said McNicholl.

A clash of heads in the sixth resulted in a cut above McCloskey's eye and after consultation with the ringside doctor the referee stopped the fight.

All three judges scored the scrappy fight 60-54 in Khan's favour although McCloskey's management claimed that the bout should not have been stopped.

McCloskey edged out Breidis Prescott in a tight points verdict in his next bout four months later but then suffered a surprise stoppage by veteran American DeMarcuis Corley in May.

However, McCloskey defeated the WBA's eighth-ranked Manuel Perez in Belfast last weekend and is hoping that win will get him back into the world title picture.

"If we are looking at either of the December dates, we need to get the fight finalised in the next two weeks because Paul will need a (training) camp of at least eight weeks," added McNicholl.

"I would expect that something will be decided in the next week."

Khan lost his WBA and IBF belts to Lamont Peterson in December of last year before having the WBA belt reinstated after the American failed a drugs test.

However, the Englishman surrendered that title when he was stopped in four rounds by Danny Garcia in July.