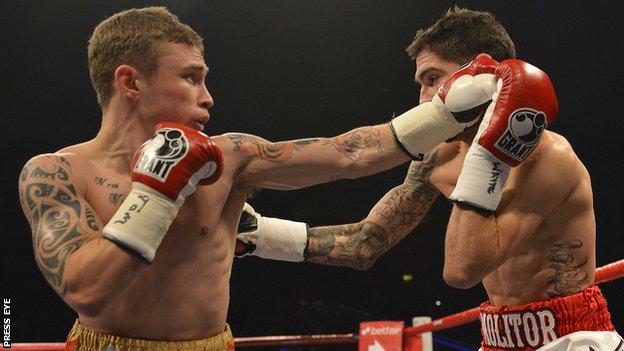 Carl Frampton's promoter Eddie Hearn appears to have ruled out any prospect of the Belfast fighter finally getting into the ring with Kiko Martinez.

Frampton has been scheduled to fight European champion Martinez on two previous occasions only for the Spaniard to pull out because of injury.

"It's difficult to build someone's career against somebody who is so unreliable," said Hearn.

"There are a couple of other interesting fights out there."

However, he has not held a world title since his 2007 defeat by fellow Mexican Israel Vazquez in a WBC super-bantamweight fight.

Marquez has lost four of his last seven contests and has not fight since a points defeat by Japan's Toshiaki Nishioka in in world title bout in October of last year.

Californian Ramos, 25, recorded his 19th straight win when clinching the WBA super-bantamweight title against Japan's Akifumi Shimoda last year but surrendered the belt in January when he was knocked out in six rounds by Cuba's Guillermo Rigondeaux.

South African Mathebula landed the IBF super-bantamweight title in March with a points win over his compatriot Takalani Ndlovubut but lost the belt four months later when outpointed by Nonito Donaire of the Philippines.

"Marquez, Ramos and Mathebula are all top-five guys and I'd like to see Carl fighting one of those guys and then start thinking about a world title," added Hearn.

"Carl is in a great position in his division as there is not a huge amount of money floating around so we can afford - because he's a big draw in Ireland - to bring those fighters over and then have him fighting for a world title on his home turf."

Frampton's next contest is being earmarked for January in Belfast in a bill which is also likely to feature Paul McCloskey.

Light-welterweight McCloskey was linked with a possible rematch with Amir Khan last week but the former WBA and IBF champion has instead arranged a fight with unbeaten Carlos Molina.

Matchroom promoter Hearn also hinted that victory for Brian Magee in his WBA world super-middleweight title belt with Dane Mikkel Kessler later this year could set up a rematch with Carl Froch for the Belfast man.

Current IBF super-middleweight champion Froch knocked out Magee in the 11th round of a Commonwealth and British title bout in 2006.

"If he beats Kessler, it will be almost impossible for us not to fight Magee," added Hearn.

"We want to fight Kessler so if he beats Kessler, we've got to fight Magee."

However, Magee may have to wait for a Froch bout with the Nottingham fighter defending his world title against American Yusaf Mack on 17 November and then in line for a rematch with Lucian Bute in the early part of next year.