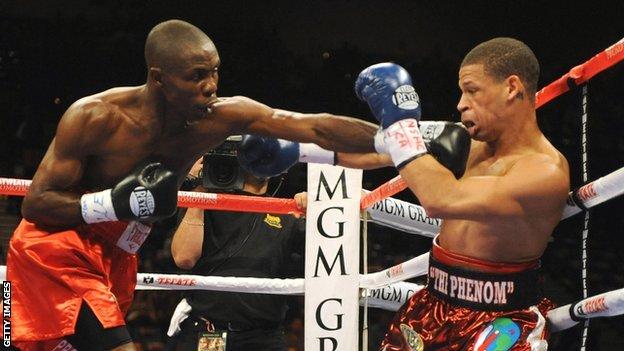 Cruz, 31, competed in the 2000 Olympic Games and is on the verge of a world title fight with the WBO.

"I've been fighting for more than 24 years and as I continue my career, I want to be true to myself," said Cruz, who has won 18 of his 22 contests.

"I have and will always be a proud Puerto Rican. I have always been and always will be a proud gay man."

The revelation comes two weeks before Cruz takes on Jorge Pazos for the WBO Latino featherweight crown in Florida, a bout that could propel him towards a world title fight.

Cruz has had two victories since being stopped by Cornelius Lock - his first professional defeat - and knocked out by former world champion Daniel Ponce de Leon in successive bouts.

Cruz added: "I want to try to be the best role model I can be for kids who might look into boxing as a sport and a professional career."

Former two-weight world champion Emile Griffith came out as bisexual in an interview with Sports Illustrated magazine, but his admission came after he had retired.

In Britain, only Surrey cricketer Steven Davies, footballer Justin Fashanu, who took his own life in 1998, and dual-code rugby international Gareth Thomas have come out during their careers.

In 2007, British basketball star John Amaechi became the first NBA player to publicly announce he was gay, but he had retired three years previously.