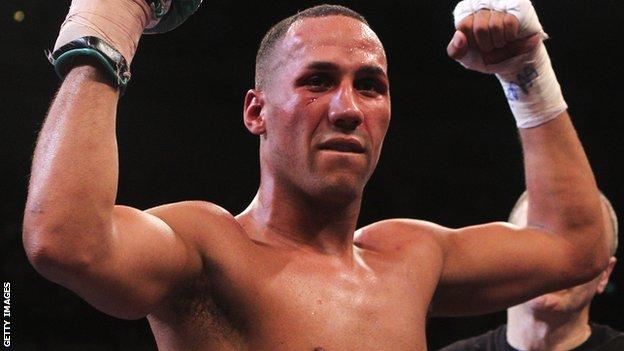 The 2008 Olympic champion dominated the early rounds and threatened to outclass his opponent in Kent.

But the Frenchman soaked up some big hits, started to dominate the ring and and came back strongly.

The Londoner, who was only fighting for the second time in a year, was on top from the beginning of the second defence of his belt - controlling a steady if unspectacular opening round in which he landed a number of good combinations.

DeGale flew out at the start of the second and third and caught Mohoumadi with a number of powerful blows.

However, despite looking a little short of peak fitness and getting caught on the ropes on a couple of occasions, DeGale remained in control until an even fifth round.

The 26-year-old had a strong finish to the round and referee Manuel Palomo had to warn Mohoumadi for using his head, but the rangy Frenchman began to pose a serious threat and was dominating the centre of the ring.

The pattern continued with DeGale seemingly content to wait on the ropes and try to pick off his opponent, and the tactics worked to a point as he landed a succession of blows in the sixth, seventh and eighth.

But Mohoumadi, who had won 13 of his 16 professional fights going into this bout, was now on top and DeGale, who had nine knockouts and just one defeat from his previous 12 fights, was looking increasingly tired in the face of constant pressure.

However DeGale rallied in the 10th with some classy hits that rocked Mohoumadi, and he managed to hold on despite a nervy final two rounds.

"I knew he was going to be tough and durable but I didn't think he'd be as tough as that," DeGale admitted. "That's why I've got to train hard.

"We've been working at it in the gym because sometimes I get lazy and stay on the ropes and I don't bend my knees or I don't bob and weave.

"I just stand up straight like a soldier. I had to have a round off in there because he was so tough. But I live and I learn and we go back and the gym next week and we work on it."

On the undercard, Chris Eubank Jr maintained his unbeaten start to his professional career with an eight-round points win over Latvia's Ruslans Pojonisevs.