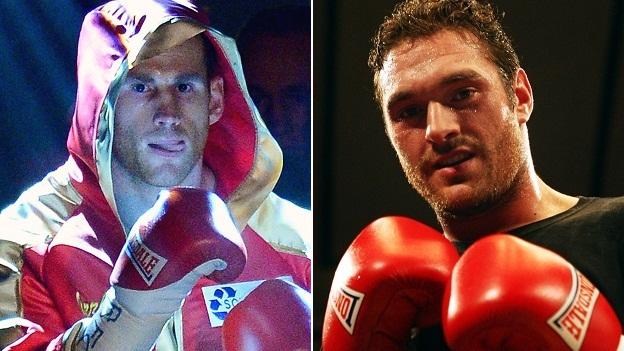 David Price says Tyson Fury is an "idiot" and wants to fight the fellow British heavyweight next year.

Fury could be punished by boxing chiefs after an expletive-filled rant on Twitter at his rival after Price's defeat of Audley Harrison on Saturday.

But Price, 29, told BBC Sport: "He's idiotic and giving the sport a bad name the way he's running round like a playground bully."

The British Boxing Board of Control has said it will discuss the inflammatory comments of Fury, who has also criticised Harrison, ex-world champion David Haye and former opponent Dereck Chisora.

"We are grown men and no-one bullies anyone as far as I'm concerned, and especially not him," said British and Commonwealth champion Price.

"There is a genuine dislike for each other and that is going to make for a great fight. A massive fight.

"He's getting angry, and I say keep talking, because he's building the fight. The things he's saying aren't bothering me in the slightest.

"It's like dealing with a kid at school talking absolute nonsense.

"I'd take the fight this week but the reality is it's more likely to happen next summer some time. Keep building it along nicely. Let Tyson do his promotional work on Twitter or whatever else and I'll let my fists do the talking as usual."

Promoter Hennessy defended Manchester's Fury, who is currently on a training camp in Belgium, and said he would postpone a possible world title shot in order to face Liverpudlian Price.

"I would say he [Price] couldn't be further from the truth. Tyson Fury is certainly not a playground bully in any way, shape or form," he said of the boxer who is the son of Irish traveller parents.

"On a daily basis, especially on social networking sites, he takes unbelievable abuse and a lot of it racist abuse when he's being really nice and courteous to people.

"Tyson just gets on with life but they are hurtful comments and it's uncalled for. He's only just turned 24, he's a young man. Every now and again he is going to explode."

Fury returned to Twitter on Tuesday evening, saying he would "splatter" Price. "I really mean it from the bottom of my heart he is getting it badly," he said.

Price was scheduled to meet Fury earlier this year but Fury vacated the British and Commonwealth titles, allowing Price to claim them when he knocked out Sam Sexton in May.

Price, who beat Fury twice during their amateur careers, defended those titles for the first time when defeating Harrison with an 82-second knockout.

Price's next bout will be against 45-year-old former British, Commonwealth and European champion Matt Skelton, on 8 December.

Fury last fought when claiming the vacant WBO Inter-Continental Heavyweight title with a fifth-round stoppage of American Vinny Maddalone in July and is scheduled to fight on 1 December against an opponent who has yet to be named.

"If David Price really genuinely wants to fight we will put our world title plans on hold and we will make the fight," said Hennessy.

"When it comes down to it, that is a fight that Tyson will look absolutely sensational in and he'll take David Price apart.

"He's [Price] nowhere near a world title. He may be almost six years older than Tyson but he's a novice compared to Tyson."

After Saturday's bout, Price's promoter Frank Maloney offered to put up £500,000 for Fury to fight his man.