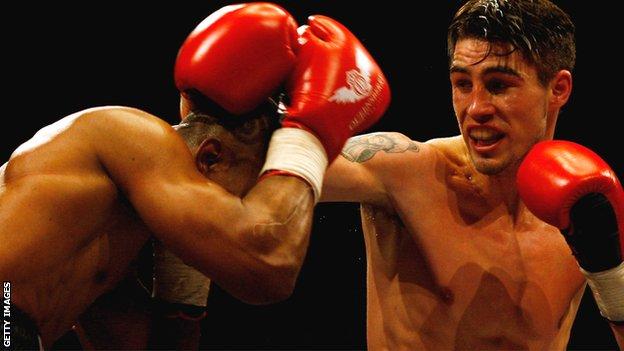 Swindon boxer Jamie Cox insists he is fully fit and ready to make his ring return after a year out through injury.

But he will challenge holder Gary O'Sullivan for the WBO International middleweight belt on 15 December.

"I feel better than ever now. I had to have a few operations but we got there in the end, thanks to a good surgeon," Cox told BBC Radio Wiltshire.

"It's definitely the fight that I want. He's a solid fighter and he hasn't been beaten yet, so I have to respect him, but hopefully I can use my skills to my advantage."

Cox's fight will be on the undercard when Ricky Burns defends his WBO lightweight title at the Excel Arena in London.

And if he can overcome O'Sullivan, from the Republic of Ireland, he will be in contention for a world title shot of his own.

"It's a good chance for me to fight for the WBO International title, which will get me a ranking in the top 10," Cox explained.

"I don't think I would challenge for a world title straight away but there's a chance to do it. There may also be a shot at the European after this one.

"It will open a few doors for me and I think it's a fight I can win."