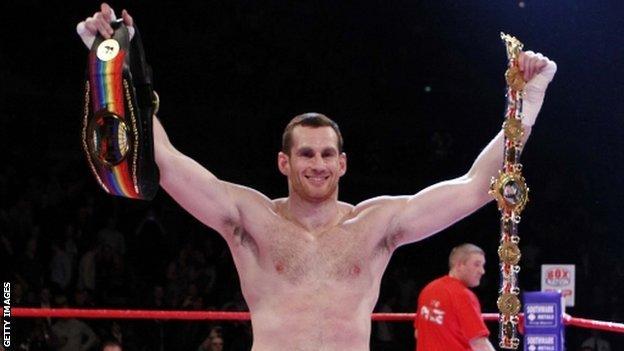 British and Commonwealth heavyweight champion David Price will defend his titles for a second time when he fights Matt Skelton at Aintree on 30 November.

The 29 year-old knocked out the 2000 Olympic champion Audley Harrison in 82 seconds earlier this month.

But Price expects a much tougher task against Skelton in only his 15th professional fight.

"I am aware he is 45, but he has won major championships and challenged for the world title," said unbeaten Price.

"I have only boxed 14 times as a professional and am still learning and Matt will bring something new for me."

A former kick-boxing world champion who only turned to boxing in his 30s, he has recorded wins over Danny Williams and Michael Sprott in a career that has yielded 28 wins from 34 professional fights.

He also challenged Ruslan Chagaev for the WBA title in 2008, only losing on points.

Price, from Liverpool, has made it clear he would like to fight fellow British heavyweight Tyson Fury next year.

Price, who won a bronze medal at the 2008 Olympics, won his titles with a fourth-round knockout of Sam Sexton in May.