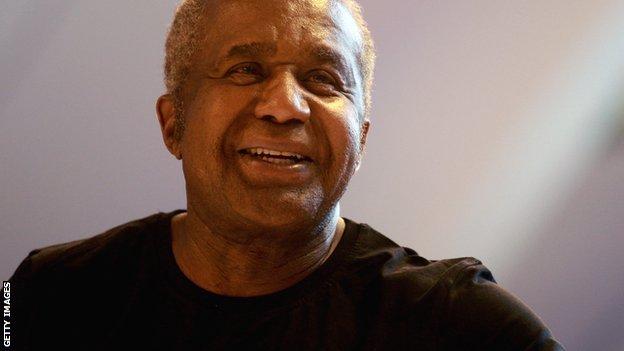 Emanuel Steward, who trained legendary fighters Thomas Hearns, Lennox Lewis and Wladimir Klitschko among many others, has died at the age of 68.

He made his name as a trainer at the Kronk gym in Detroit, where Hearns first became world champion in 1980.

The American handled more world champions than any other trainer, 43 in all, and was working with heavyweight champion Klitschko in July.

"It is not often that a person in any line of work gets a chance to work with a legend. Well, I was privileged enough to work with one for almost a decade.

"My team and I will carry on with the goals we had set while Emanuel was with us because that is exactly what Emanuel would have wanted. I know he will be with us in spirit along the way and we will accomplish these goals in his honour.

"Rest in peace Emanuel. You will be greatly missed."

"He was quite a character," he told BBC Radio 5 live. "He had a very strange method of doing his training programme, but got the best out of Lennox Lewis and took him to a new level.

"Steward's links with Tommy Hearns in the Kronk gym forged his reputation as a legend of the ring. In the 1980s, the Kronk became the most feared production house in boxing. Lennox Lewis linked up with Steward after being knocked out by Oliver McCall in 1994 and went on to dominate the heavyweight division. More recently he did a similar restoration job with Wladimir Klitschko, a man different in personality and style to Lewis, but Steward could work with them all."

"I also saw him work with Naseem Hamed and he was a great believer in the fighter having to be excited, and having to knock people out. He wasn't really into the science of boxing, more the excitement, and giving the crowd what they wanted."

Ten-time world champion De la Hoya, who trained under Steward in 1997, said: "It brings me great grief and sadness to hear of the passing of one of the best and most respected trainers of this era.

"I learned a lot from him during our professional relationship and I will be forever grateful for his help during that time.

"We were also friends and I know I am going to miss him as so many others will too. He was an important part of our boxing community."

Freddie Roach, who trains multiple world champion Manny Pacquiao, said on Twitter: "Emanuel Steward passing today is the biggest loss to boxing in a long time. He'll be greatly missed. My thoughts and prayers are with his family."

As an amateur boxer, Steward won 94 of his 97 fights and a National Golden Gloves bantamweight title in 1963, before becoming a trainer.

He was perhaps most closely associated with Hearns, whom he first trained as an amateur at the fabled Kronk.

Steward linked up with Lewis following the British heavyweight's defeat by Oliver McCall in 1994 and the partnership endured until Lewis's retirement in 2004.

Steward was immediately enlisted by Klitschko and, having lost his WBO belt to Corrie Sanders in 2003, the Ukrainian became world champion again in 2006.

The duo worked together until July when Steward became ill, leaving Klitschko to train without Steward for his fight against Mariusz Wach next month in Germany.

"His spirit is always here," Klitschko said. "I can hear his voice in sparring while doing things, whispering in my ear. As the famous saying goes, 'the show must go on'. That's exactly the case."