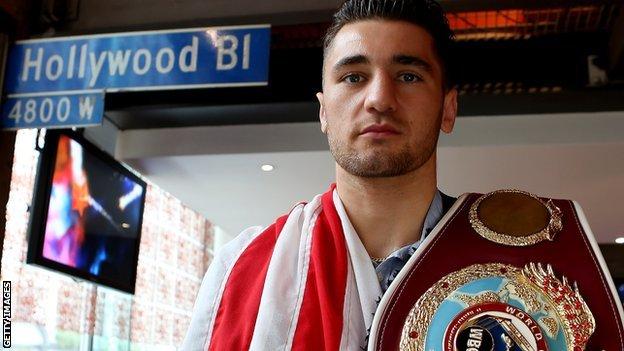 Nathan Cleverly will defend his WBO light-heavyweight title for the fourth time on Saturday after Shawn Hawk stepped in as a late replacement.

The 25-year-old had been due to fight Ryan Coyne in Los Angeles but because of a contract dispute with former agent Don King.

Cleverly feared he may have to fight a 10-round non-title bout but American Hawk is set to challenge his title.

"He has a good record with a high KO ratio," Cleverly said.

"He's a big puncher and I won't treat him lightly because I can't get careless or reckless.

"He has a big opportunity by coming in late for a world title bid. He has nothing to lose. He is dangerous but I will be on my guard.

"I will be aiming to look good and will definitely be trying to take him out."

The 28-year-old has won 23 of his 26 fights but Hawk lost his last fight on points to champion Eleider Alvarez in a WBO NABO light-heavyweight title clash in June.

Cleverly had been originally been scheduled to defend his WBO light-heavyweight title against Coyne.

But the American said his contractual dispute with former agent Don King put paid to the fight.

"Much as I hate to say it, this fight will not be going forward with myself involved in it," Coyne told BBC Wales.

"This is the biggest disappointment of my career.

"I trained very, very diligently for this fight and I was devastated when I got the news.

"I want to apologise to the fans in the United Kingdom and the United States that this fight won't be going ahead, but hopefully we can get it on at a later date.

"We just have to let the managers and attorneys sort this out."