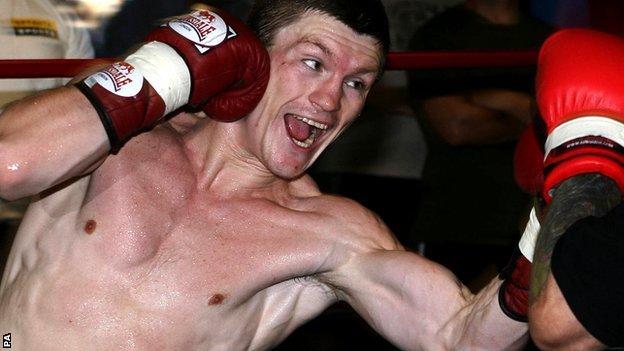 Ricky Hatton will win his comeback fight against Vyacheslav Senchenko with ease, according to the only British boxer to face the Ukrainian.

Stuart Elwell, 34, fought the then WBA intercontinental welterweight champion in 2008 and lost in the second round.

Elwell insists if Hatton, 34, fights aggressively at Manchester Arena on 24 November, he will be too strong.

"If he's the old Hatton, he'll go in there all guns blazing and he'll stop him early," Elwell told BBC Sport.

Hatton, a former IBF and WBA light welterweight champion who also held the WBA welterweight belt, is returning to the ring for his first fight since being knocked out by Manny Pacquiao in Las Vegas in 2009.

The Mancunian has spoken of his desire for redemption and maintains his comeback is motivated by wanting to make friends, family and fans "proud".

As far as Elwell is concerned, 35-year-old Senchenko represents a wise choice for a first fight back.

"To be honest, I think Ricky Hatton is the perfect fighter to beat him," said Elwell.

"[Senchenko] doesn't like being pushed back, and when I was pushing on to him he didn't seem to have any answers that a fighter of quality would have."

"Senchenko's punches were nothing extraordinary," he said. "He didn't punch half as hard as Kell Brook did; that was horrible.

"Hatton is a pressure fighter and I don't think Senchenko will be able to deal with that. I predict Hatton inside six rounds."