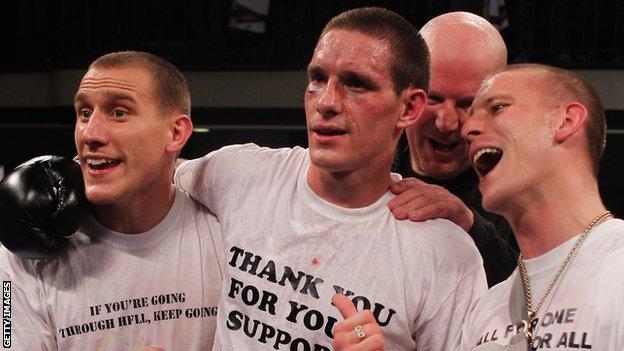 Liam Walsh will cause a "massive upset" by beating Ricky Burns for the WBO lightweight title next month, according to his twin brother Ryan.

Walsh, 26, has been widely written off

"It will be classed as a massive upset. But not in my eyes," English super bantamweight champion Ryan told BBC Radio Norfolk.

"Boxing's about styles. Not size. Give me speed, which Liam's got in abundance in this fight."

Burns, 29, has been placed as firm favourite for the 15 December bout after making

"I more than fancy him. I'll be putting my money where my mouth is," Ryan said of Liam, who is unbeaten in 13 professional fights.

"We know Burns is very hot. His last performance was brilliant. His last seven fights have been world title fights at two different weights. We're not making it easy for ourselves.

"But I fancy him big time. Liam's speed should definitely be key.

"Let's say it's David and Goliath - that's how people outside Norfolk see it. If David was never given a chance the story would never be told."

And Ryan, who faces Ronnie Clark for the vacant British Masters super-featherweight title at the Norfolk Showground this weekend, believes his brother's fight is "an early Christmas present", 12 months after their father died.

"We probably had the worst Christmas you could imagine last year," he said. "I'm a massive believer in fate and karma.

"To go from the terrible news last year to unbelievable news this year - it's the dream. Any fighter tells you they want to be a world champion. He gets his chance."