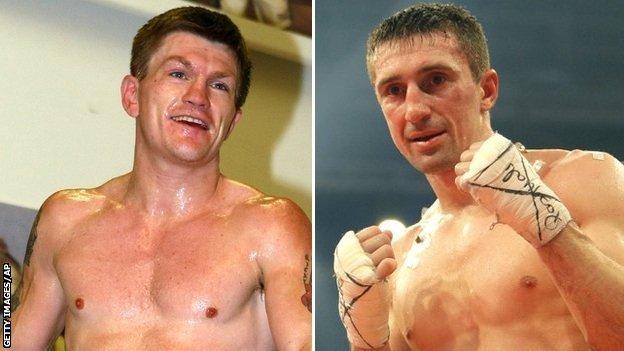 "You can always pick the winners at the starting gate - the winners and the losers," says Roberto De Niro, suited and booted and a mobster top-to-toe.

"Who woulda put a penny on me?"

Once Upon a Time in America, that gritty and at times extremely violent 1984 gangster film, is a favourite of 35-year-old Vyacheslav Senchenko.

"The movie makes sense to me," Senchenko told BBC Sport from his base in Donetsk.

"In it there is a true friendship and treachery. De Niro shows what a real man should be."

The rangy Ukrainian, a former WBA world welterweight belt holder, is aiming to spring from that starting gate and finish the night one of De Niro's winners, and real men, when he takes on Ricky Hatton in Manchester on 24 November.

"I'm sure that Ricky will be in very good form, and I expect a good fight," said Senchenko.

"I've seen Hatton's fights. He is a really strong boxer with an attacking manner - but I plan to conduct this fight in my own manner."

Once Upon a Time charts the rise then fall of De Niro's leading man, David 'Noodles' Aaronson. Towards the end we see an aged Noodles as a shadow of his former self.

The thousands inside Manchester Arena already know they will witness two fighters who, like Noodles at the finish, are closer to their ends than their beginnings.

Hatton has not thrown a punch in anger in years, while only Senchenko knows whether he bears any resemblance to the fighter whose record shows 32 wins from 33 contests, 21 by knockout.

The first and so far only defeat of his career came in his most recent bout in April, at the gloves of American Paulie Malignaggi, a 31-year-old whom Hatton himself beat in November 2008.

Malignaggi, the current WBA title holder, could well be a future target for the newly unretired Hatton. But in the build-up to his sold-out Manchester comeback, The Hitman spent much time emphasising the challenge posed by his immediate opponent.

"It sums me up - I'm straight in at the deep end against a former world champion in Senchenko," Hatton told the assembled media.

I've seen Hatton's fights. He is really strong boxer with an attacking manner

"He's probably the best opponent I could have picked. I've never gone for an easy opponent in my life and nothing's changed.

"Fighting him shows how serious I am. He's dangerous, but he's someone I can get my teeth into. I'm fighting him, and I won't let you down."

Much has been made of Hatton's quest for redemption since he announced his return to the ring after a three-year absence dogged by self-loathing and drug abuse.

But for Senchenko, who has only once fought outside his native Ukraine or neighbouring Russia, a high-profile win over Hatton on his opponent's turf would do wonders for his international profile.

"I'm not distracted by the fact Malignaggi lost to Hatton. I drew my own conclusions after my own defeat," he insisted.

"When I heard the news [of the Hatton fight] I was very glad - I am motivated by the possibility of fighting a strong and well-known rival, and now I want to become world champion once again."

However, many have dismissed Senchenko after his bloody defeat to Malignaggi.

Never the heaviest hitter, the New Yorker nonetheless triumphed in front of thousands inside the Donbass Arena with well-executed jabs - his punch landed 62% of the time and made a mess of the Ukrainian's left eye.

And the only Briton ever to have fought Senchenko, Wolverhampton fighter Stuart Elwell, told BBC Sport that a flurry of Hatton body shots and upper-cuts thrown at close range should do for his opponent.

"On paper Senchenko looks risky but the thing that struck me most when I fought him in Ukraine was despite the glossy record and world title he always looked scared and nervous. If that was the case for a home fight then when he enters the Manchester Arena and hears thousands of Brits screaming for his head I think the moment will fold him up like a beach chair. He's not bad but the atmosphere will bother him and Hatton should do the rest."

"To be honest, I think Ricky Hatton is the perfect fighter to beat him," said Elwell.

"[Senchenko] doesn't like being pushed back, and when I was pushing on to him he didn't seem to have any answers that a fighter of quality would have.

"Hatton is a pressure fighter and I don't think Senchenko will be able to deal with that. I predict Hatton inside six rounds."

Then, of course, there will be the unique experience of fighting in front of a vocal and highly partisan Hatton support. The comeback fight sold out a week after it was announced, even though no opponent had then been named.

Is Senchenko worried? "No. I've already boxed at Donbass Arena, which contains 50,000 people. I think that in Manchester the atmosphere will be approximately the same. His fans won't disturb me - I will be concentrating on the fight, and his supporters will be not a hindrance."

Hatton professes to be fighting fit and keen, but in Senchenko he faces a boxer whose pride, not to mention face, was hurt in his last bout.

Both men are veteran fighters who have given their lives to the sport. And both will be desperate for success in front of thousands in Manchester, if only to lend weight to another of De Niro's assertions in Sergio Leone's epic 80s drama: "It'd be a shame to see a lifetime of work go to waste."