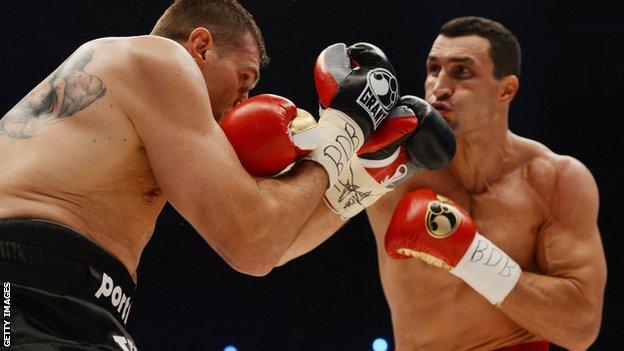 Klitschko landed at will for nearly five rounds but Wach's huge right at the end of the fifth sent him reeling.

The Ukrainian managed to survive, though, and showed no lasting effects before stepping up his punishment.

This was the first time Klitschko had fought without the legendary Emanuel Steward, who died last month aged 68, in his corner.

He paid tribute to the trainer after the fight and said: "I want to remember one man, who can't be here today unfortunately. We miss you, we love you, you are always here in the ring, thank you Emanuel."

Klitschko landed several one-two combinations in the first, with the pattern continuing in the second.

However, the previously unbeaten Wach attempted to spoil his opponent's work by tying Klitschko up.

In the fifth, the Pole brought the crowd to its feet with an overhand right that sent Klitschko into the ropes, although the Ukrainian showed his experience by covering up and avoiding any further damage as Wach sloppily went in for the kill.

But Klitschko, who has not been beaten in eight years since being stopped by Lamon Brewster in 2004, did not seem to be affected at the start of the sixth and landed a straight right that temporarily stunned Wach.

The punishment continued in the seventh and Klitschko looked to stop the fight with perhaps only the bell preventing him from doing so, with Wach sent into the ropes after yet another right hand.

Wach's lack of defence seemed to prove his undoing and he came in for severe punishment in the eighth before Klitschko settled into a rhythm in the ninth.

By the 10th Wach had marks over his eyes and nose and his lack of head movement was giving Klitschko all the encouragement he needed.

Wach did land another rare right in the 11th that opened up a cut on Klitschko's left eye but the champion closed strongly to seal victory.

"It was a very tough fight and Mariusz had to take a lot of punches," the 36-year-old said in a ringside interview. "I thought he would go down but he fought on. He caught me in the fifth, but then I slipped."