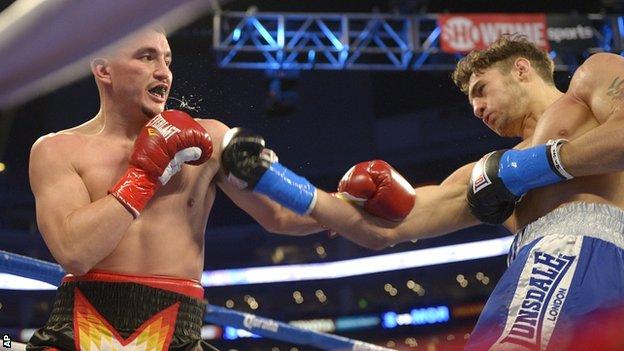 The 25-year-old displayed superior skills and hand speed to record his fourth successful defence of the belt, his first in the United States.

He took some heavy shots but knocked Hawk down twice in round seven, with a left hook in the next ending the fight.

Cleverly's 12th win inside the distance extends his unbeaten record to 25.

It was the first time that 28-year-old Hawk had failed to go the distance in his 26 professional bouts.

He was only confirmed as Cleverly's challenger on Monday after original opponent Ryan Coyne was forced out due a legal dispute with promoter Don King.

As well as the boxing, this evening at the Staples Center we've also had the Twilight premiere. The place is full of hundreds of teenage girls, who can be pretty loud, especially when they see Robert Pattinson on the screen. Cleverly is here to create an impression on the TV networks, and when you've got Mickey Rourke and Tom Jones carrying the belt in I think he certainly made a splash.

Cleverly enjoyed the experience so much in LA I think he'll move over for part of the year to do a bit of training. First of all he's got a mandatory defence and in all probability he'll fly out to Germany in the next two to three months to defend his title there. Then back to the US maybe, for one more fight before the big guns later in the year.

Cleverly's belt was carried to the ring by his fellow Welshman Sir Tom Jones and American actor Mickey Rourke at the Staples Center, the home of the Los Angeles Lakers NBA team.

From the outset Cleverly's hand speed exposed Hawk's lack of lateral movement and made him a prime candidate for the left uppercut to the head.

The American, who was a cruiserweight until 2010, began the second with a solid left hook to the body, but Cleverly responded by sending some sharp head shots on the ropes.

In round four the champion was caught flush by a firm straight right and he took some further return fire in the next, despite peppering Hawk's chin with combinations from right uppercut to left hook.

Having jostled his opponent with a left-right assault in the sixth, Cleverly unleashed a pair of right hooks in the next to send him gasping to the canvas, and Hawk was down again before the end of the round after another flurry of punches.

A thudding left hook to the kidneys left Hawk sagging, and referee Tony Crebs ended proceedings after one minute and 53 seconds of the eighth round as a concluding right sent Hawk down and the towel was thrown into the ring by the American's camp.