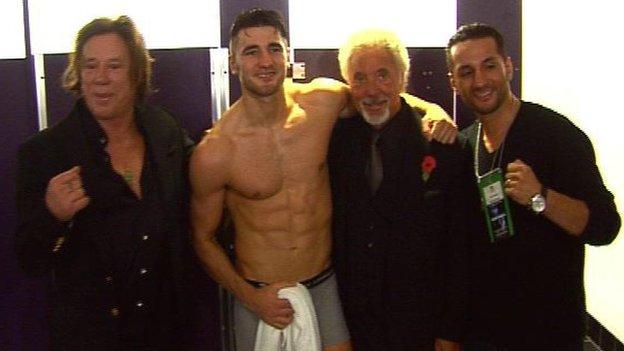 Nathan Cleverly felt the "fashionably late" arrival of his guests Sir Tom Jones and Mickey Rourke inspired him to a world title win over Shawn Hawk.

Actor Rourke and singer Jones carried Cleverly's WBO light-heavyweight belt to the ring - but only arrived 10 minutes before the ring-walk.

Cleverly said: "Sir Tom and Mickey were going to carry belt into the ring but the fight was coming close and there was no sign of them."

The 25-year-old won in eight rounds.

On Rourke and Jones, Cleverly added: "I suppose they were being fashionably late. All of a sudden, 10 minutes before the ring-walk in they step into the changing room and that gave me a real boost.

"Mickey is a cracking guy and Tom is a Welsh legend who is known and respected around the world.

This proves I'm ready for the States, I just hope their best fighters are ready to fight me

"It was an honour to have them both in my team and I can't thank them enough for wanting to help me make a name for myself in America.

"Although it was quite surreal, my mum loves Tom Jones and she's well chuffed."

Cleverly had already floored the native American twice in the seventh round at the Staples Center and referee Tony Crebs stopped the fight in the next as Hawk's corner threw in the towel.

Cleverly was a class above his underdog challenger, who took the fight at just six days notice after Ryan Coyne's forced withdrawal, and dominated from the first bell at Staples Center.

And the unbeaten Welshman extended his win record to 25 bouts as he stopped Hawk for the first time the American's 26-fight career.

"I came to America and the unknown," said Cleverly.

"I had a late replacement opponent and that can be dangerous as he came in with nothing to lose. He was quite a big puncher with a good knockout record.

"But I felt great early on and thought the writing was on the wall for him - I felt unstoppable in there.

"I've enjoyed the experience and feel I made the most of a great opportunity of fighting in the States.

"I got some good exposure on American TV and I think the crowd enjoyed the fight. They booed me as I went in but some fans gave me a standing ovation when I left the ring, which shows my exciting style can win people over here."

But first the WBO have told Cleverly he must make a mandatory defence of his world title against the number one WBO challenger Robin Krasniqi, probably in Germany in February.

"It is an exciting time for me," said Cleverly. "This proves I'm ready for the States, I just hope their best fighters are ready to fight me."