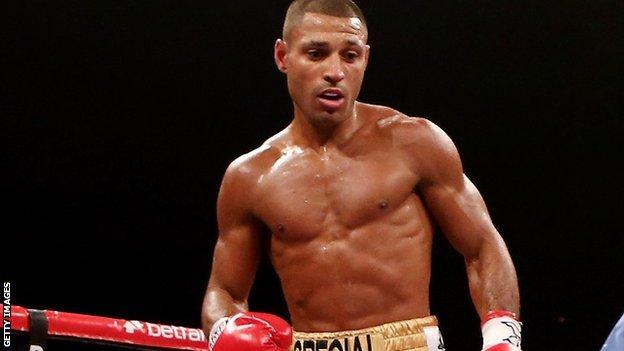 Kell Brook's promoter Eddie Hearn says a possible fight with Amir Khan would have to be on Brook's terms.

Brook, 26, is to face Devon Alexander for the IBF welterweight title in America on 19 January.

Hearn told BBC Radio Sheffield: "He's coming off back-to-back losses, he has no belt and he doesn't really bring that much to the table.

"If Amir Khan wants to fight for the title when we've won it then that'll be on our terms."

Khan, who lost to Danny Garcia in July, is set to take on American fighter Carlos Molina in Los Angeles on 15 December.

Brook defeated Argentinian Hector Saldivia in October to stretch his unbeaten run to 29.

After the fight Brook said: "I would love to take Khan's chin clean off and everyone knows I want to destroy Khan."

Hearn is confident the Sheffield fighter can get the better of Alexander, who has a record of one defeat from 25 bouts.

"Devon Alexander is very skilful and quite tricky. He's a bit of a spoiler and a counter puncher. He's not the biggest puncher in the world but he is technically very gifted and he's only 25," he continued.