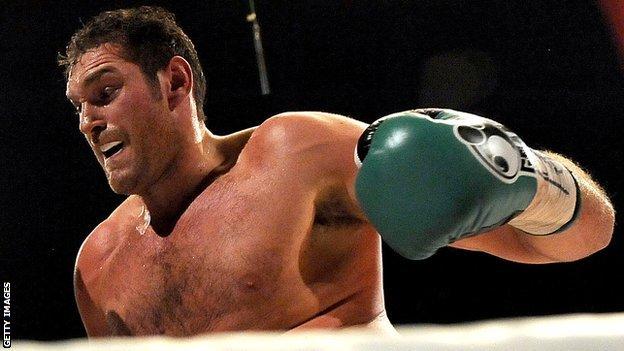 American Kevin Johnson has been named as Tyson Fury's new opponent for the WBC heavyweight world-title eliminator in Belfast on 1 December.

Johnson, who went the distance with world champion Vitali Klitschko in 2009, has won 28 of his 31 fights.

"Johnson is the kind of opponent that I want - we needed a world class fighter and we've got one," said Fury.

He added: "When I take him apart the world will sit up and take notice.

"I am getting closer to a shot at Klitschko myself and I'm going to show Vitali why he has to fight me because when I do a number on Johnson and get him out of there I'll have done a better job than Vitali did on him."

Fury, 24, claimed the vacant WBO Inter-Continental heavyweight title by stopping American Vinny Maddalone in the fifth round of his last fight in Somerset in July.

He has won all of his 19 contests to date, 14 by knockout, and is targeting a shot at reigning champion Vitali Klitschko.

"It's going to be the best American fighter against the best fighter in the U.K," said Johnson.

"Tyson is a helluva fighter but he's never seen anything like the "Kingpin" up close and personal.

"I'm not Derek Chisora or Neven Pajkic - I'm the real deal and Tyson will find that out on 1 December."