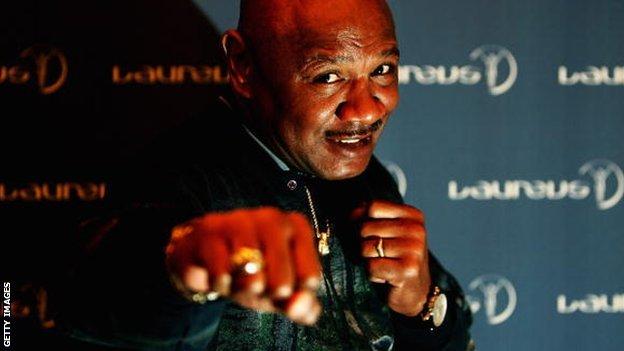 Marvin Hagler has warned former cricketer Andrew Flintoff of the dangers he will face after deciding to switch to boxing.

"You should do boxing first and then cricket," said former middleweight world champion Hagler, nicknamed Marvelous during his career. "At least you're not getting punched around anymore. I just say good luck to him and keep your head down and your hands up."

Hagler, who switched to acting after his retirement from the ring in 1988, added: "Changing from being a fighter to being an actor is a lot different from changing to being a fighter from a being a cricket player.

2005: Named Man of the Series as England win the Ashes for first time since 1987. Wins BBC Sports Personality of the Year award

2007: Stripped of vice-captaincy after getting into late-night difficulties with a pedalo following a drinking session

2009: Retires from Test cricket after helping England win the 2009 Ashes

2010: Forced to retire from all forms of cricket by persistent injuries

"But a lot of people have other dreams and want to give being a fighter a shot. I've seen this happen with actors before - and fighters wanting to be actors. That's the way the world is and everybody has to do what they want in life."

The 58-year-old's words of encouragement are in contrast to what many in British boxing circles have had to say about the star of England's celebrated 2005 Ashes victory.

Much of the criticism has centred on the fact that Flintoff's late career change is the subject of a three-part television documentary.

Promoter Frank Warren dismissed it as "car crash television", while the British and Commonwealth heavyweight champion David Price said Flintoff, 34, "could get hurt".

Frank Maloney, the manager who led Lennox Lewis to the top, went even further, describing the decision to award the 34-year-old with a boxing licence as "a scandal".

Flintoff, however, rejects these claims and insists his motives are honourable.

Speaking at a preview screening of the first episode of the documentary, which will be broadcast a week before the fight, he said: "You couldn't go through this for a TV stunt.

"If I was looking for publicity I would have picked something easier.

"I appreciate that people want to protect their sport, I'd be the same with cricket. But I'm hoping this is something where boxing is celebrated.

"It's not my intention to cheapen the sport or show it up."

Having struggled with his weight during his cricket career, Flintoff claims to have lost 45lbs over the last three months thanks to trainer Shane McGuigan's fitness regime.

McGuigan's father Barry, the former WBA featherweight champion, has overseen Flintoff's boxing tuition and he is adamant the project is worthwhile.

"To say it cheapens boxing is complete nonsense. That's a case of the green-eyed monster, I'm afraid," said McGuigan.

"We're promoting the sport in a very positive way."

That may well prove to be true, but it is all a far cry from the days when the likes of Hagler, Tommy Hearns and Sugar Ray Leonard helped boxing dominate the sporting headlines.

Hagler, who was the undisputed middleweight champion of the world from 1980 to 1987, retired in 1988 - a year after his famous, and infamous, split-decision defeat by Leonard.

But it is probably the fight against Hearns, two years before, that he is best remembered for now.

Billed as "The Fight", it has since become known as "The War": a three-round classic that saw Hagler survive a torrid first round, and a badly-cut head, to stop Hearns with a devastating combination.

Speaking from the Laureus Sport for Good Foundation global summit in Barcelona, Hagler said: "I can't remember the first round, I just know we threw a lot of punches.

"The fight was just a battle and I still get chills when I see it.

"They wanted to stop the fight in the third round, but when the doctor wiped the blood out of my eyes, I said 'no, I ain't missing him, am I?'"

In Hearns' corner that night was Emanuel Steward, the legendary American fighter and trainer who died last month.

"Even though he trained Tommy Hearns, he was still a great man for me," said Hagler.

"I remember him from my amateur days and I was with him shortly before he passed away.

"He was always a supportive friend of mine. He was a well-liked man and I know he is going to be missed."