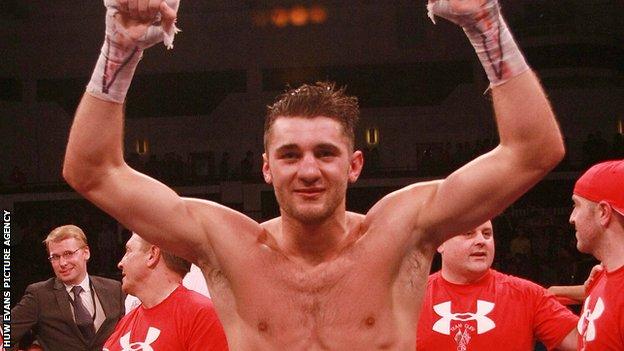 You certainly can't say that the sport of boxing ever undersells itself.

Our team were on hand to see an impressive eighth-round stoppage, but we weren't the only Welsh supporters.

The legend that is Sir Tom Jones carried his belt into the ring and on this week's Sport Wales we'll hear from the Welsh crooner along with a host of star names as they give us their take on Cleverly's win.

Away from the US West Coast and boxing, Sport Wales has a distinct North East flavour this week, influenced by Newcastle, Middlesbrough and Scarborough!

Presenter Dot Davies will be on Tyneside as she discusses Swansea's trip to St James' Park with the former Newcastle defender Steve Howey. We'll hear from inside both Premier League camps too as Michael Laudrup and Alan Pardew gives us their view ahead of the match.

Cardiff City captain Mark Hudson talks to Sport Wales about the Bluebirds' amazing form at home ahead of their game with Middlesbrough.

Boro have a great record at the Cardiff City Stadium, but will have to break City's 8-match unbeaten run on home soil if they are to become the first team to take three points out of the Welsh capital.

In fact, Cardiff have the best home record in the entire Football League, so you could say they're riding the crest of a wave….we did as well when we went down to Llantwit Major in the Vale of Glamorgan for the British Surfing Championships.

So what's the Scarborough link I hear you ask?

Well did you know that the Swansea attacking midfielder Jonathan de Guzman was born there? No, not that Scarborough…. Scarborough in Ontario, Canada of course! Find out more when he speaks to Sport Wales this Friday 21:35 BBC Two Wales