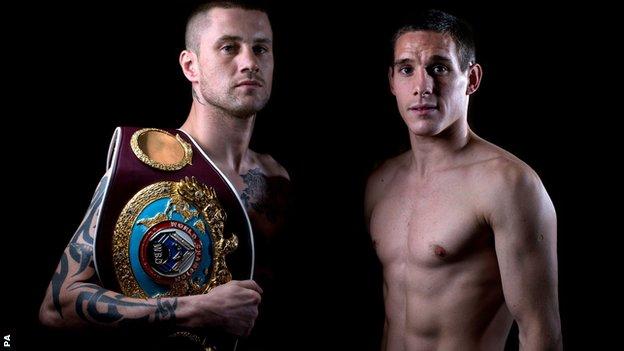 Liam Walsh has pulled out of his WBO lightweight title fight against champion Ricky Burns on 15 December after being hurt in a road accident.

Walsh, 26, suffered muscle injuries in the accident at Marsham, Norfolk and had to be cut out of a car.

Management for Scotland's Burns are in the process of lining up a replacement opponent for the London ExCeL bout.

"If it had meant a week and a half off, I would have been happy to go ahead but it's more like four weeks," said Walsh.

Burns, 29, was expected to start the fight as an overwhelming favourite following his impressive fourth-round win over Kevin Mitchell in September.

And a possible unification fight with American Adrien Broner was planned for the winner, assuming Broner can dethrone WBC lightweight champion Antonio DeMarco on Saturday.

Despite Walsh's withdrawal, Burns's manager Alex Morrison said his charge would continue his preparations to defend his title.

"Ricky looks great in training and his sparring is well under way," he said.

"It's unfortunate what has happened to Walsh and we send him our best for a speedy recovery but his withdrawal won't stop Ricky fighting in London next month. We hope to announce his new challenger in the next few days."

The accident capped a miserable 12 months for Walsh, whose father died last year.

"It's been a bad year anyway and I thought it would be a good way to end the year.

"I'm in no condition to be fighting really. A day or two after the crash I was still selling tickets, telling people I was going to be fighting. But the doctor said 'not a chance'.

"I desperately want another chance in the new year and I'm hoping that will be the case - Burns may have a mandatory challenge though. I must be the unluckiest person ever."