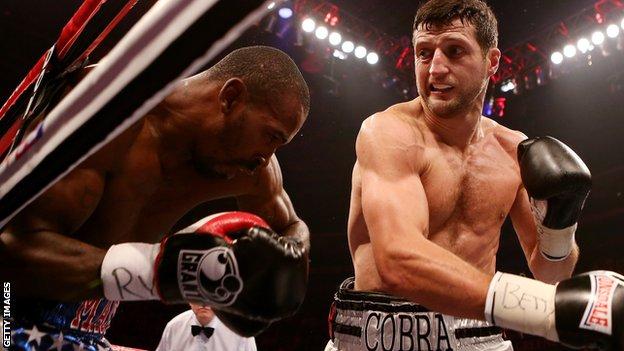 Perhaps spurred by Mack's pre-fight jibe that he is a "fake Joe Calzaghe", Froch launched a devastating assault from midway through the first round to set the tone for a dominant performance.

Mack was left hanging on at the end of the first two rounds as he found himself hopelessly out of his depth against one of Britain's finest modern-day boxers.

So it was no surprise when the end came - Froch overwhelming and outclassing his rival with a stunning combination to the head and body that left Mack in a crumpled heap on the canvas for a second time in the fight.

While Mack, who lost his only previous world title bout against Tavoris Cloud last year, was not of the same world-class standard as some of Froch's more recent opponents, the local boy was keen to put on a good performance in front of his home fans.

Froch was also anxious to show he is in fine fettle ahead of a planned three-fight finale to his career that, if safely negotiated, would confirm the three-time world champion's standing as one of the best super-middleweights in history.

The three fights Froch craves to create his legacy are rematches with Lucian Bute in Canada in March, Mikkel Kessler in the UK during the summer and against super-middleweight king Andre Ward in the United States at the end of 2013.

Kessler and Ward are the only two fighters to have beaten Froch and they will have noted the Briton's impressive form.

Fresh from his stunning fifth-round stoppage of Canada's Bute in May, Froch dominated from the first bell and had his opponent on the floor with a number of punishing blows - the American hanging on at the end of the round as he struggled to deal with the Cobra's power.

It was a similar story in the second as Mack, who had stepped down a division for the fight, failed to cope with some crunching body shots before again looking thankful for the bell as Froch shook him with a devastating right to the side of the head.

There was little by way of a counter-attack from Mack, and he was put of his misery when Froch unloaded with a flurry of punches and a swift left hook in the third that left the American slumped on all fours and out for the count.

Just like against Bute, the manner of Froch's victory was both classy and clinical and sends him into the new year in the best possible shape.

The 29-year-old light-heavyweight Bellew, who put down his opponent twice in the opening rounds, recovered from a bad cut above his right eye to win a bruising encounter against the durable Argentine.