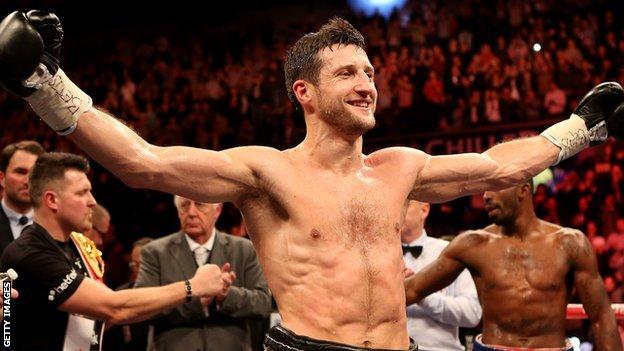 Three-time world champion Carl Froch said he is "in his prime and ready for anybody" after his in Nottingham.

Froch, 35, is now targeting rematches against Mikkel Kessler and Andre Ward - the only two fighters to have beaten him in a 32-fight career.

He said: "I have not won every single fight every time I have stepped through the ropes but I don't get outclassed. I lose close points decisions but I can put it right against Kessler and Ward - I know I can."

Froch defended his IBF super middleweight by flooring his opponent in the first round before leaving Mack on the canvas again in the third.

He added: "I don't get spectacularly knocked out like some other British fighters who think they are superstars.

"I am in my prime and I am ready for anybody. I have proved that with the people I have fought.

"I just have to put in the hard work for 12 weeks before a fight.

"I'm at the stage of my career where I have not got time to waste. I'm not going to do anything stupid by jumping in too early but I think I can be ready to fight again in February or March."

It was the Cobra's easiest night's work for a while as Mack, who struggled to make the weight after moving down from the light-heavyweight division, looked well short of the world-class standard of opposition that Froch has shared the ring with in previous fights.

None of the 9,500 people inside the arena will have been shocked by the third-round knockout, but there was surprise at how long Mack lasted as he soaked up a tremendous amount of punishment before succumbing to a devastating combination to body and head.

"If he had got any success early on, he would have soon gained in confidence," said Froch, who revealed his partner, Rachael Cordingley, is four months' pregnant with their second child in the post-fight news conference.

"I took the fight away from him straight away; I was catching him with some heavy shots.

"He stayed in range and didn't move as much as I thought he would, so to sit in front of me and take those shots; not many people can do that.

"You can't say he was just here to survive because if you look at his previous 37 fights, he has only lost to world champions so I had to prepare as meticulously for this fight as I do for anybody else.

Froch's promoter Eddie Hearn is now hopeful he can secure the three fights in 2013 that Froch craves.

He wants to fight Lucian Bute, Kessler and Ward again - and Hearn remains hopeful, although he admits a fight with the mandatory challenger, Canadian Adonis Stevenson, may be more likely than a clash with Bute in Montreal.

"We want to fight Kessler and the two top things trending on Twitter [on Saturday night] are Carl Froch and Andre Ward," said Hearn.

"Ward has tweeted saying he fancies a trip to the UK and I think he would come.

"The reality is Bute or Stevenson, Kessler and Ward for 2013. They are the only fights that particularly interest us."