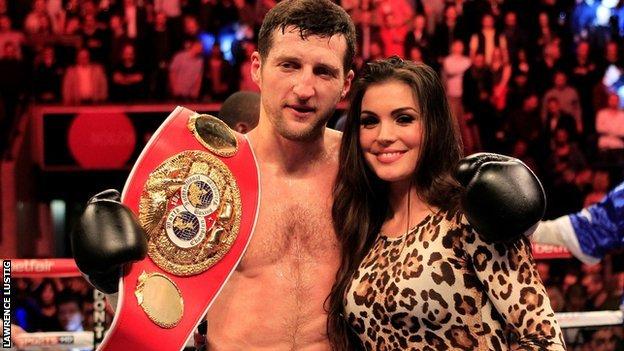 Carl Froch's desire to stage his next world title fight at one of his home city's main football venues seems to be moving closer to reality.

Nottingham Forest say they are "open-minded" about staging the IBF super-middleweight champion's next bout.

Notts County have also been eager to host a Froch bout in the past and have said they would welcome discussions.

His most likely next opponent, Mikkel Kessler, has said he would fight Froch "any time, any place".

Froch, who defended his crown with a third-round knockout of Yusaf Mack in Nottingham on Saturday, tasted his first professional defeat against Kessler in 2010.

Froch is contractually obliged to meet Lucian Bute in Canada, but the former Romanian was easily beaten by the Nottingham boxer in their first meeting and may not trigger the re-match clause.

And 35-year-old Froch has said a bout against either Kessler or Andre Ward - the only two boxers to have beaten him in a 32-fight career - is his priority.

Froch's promoter Eddie Hearn said it would be "very special" if a fight could take place at the City Ground or Notts County's Meadow Lane home.

County tried to stage Froch's world title bout against Lucian Bute in May.

However, because the ground did not hold a boxing licence, Hearn decided he could not wait for permission to be granted. The Nottingham Arena was chosen instead.

Notts County now have permission to hold boxing matches at its stadium.

Chief executive Jim Rodwell told BBC Radio Nottingham: "We were all very impressed with Carl's performance last weekend and were delighted that he recorded another emphatic victory.

"He is obviously a sporting icon in Nottingham and Notts County would always be open to speaking with Carl's representatives about staging a fight here at Meadow Lane."

Forest fan Froch said: "Fighting at the City Ground would be unbelievable.

"I go to loads of Nottingham Forest games and I go on the pitch sometimes and get a standing ovation, so to be in the middle of the pitch fighting someone like [Mikkel] Kessler or [Andre] Ward, I can only imagine how phenomenal that would be, a career-defining night."

A Nottingham Forest spokesman said: "Carl has never made any secret of his desire to fight at The City Ground and, as a club, we are open-minded about the possibility of it happening one day."