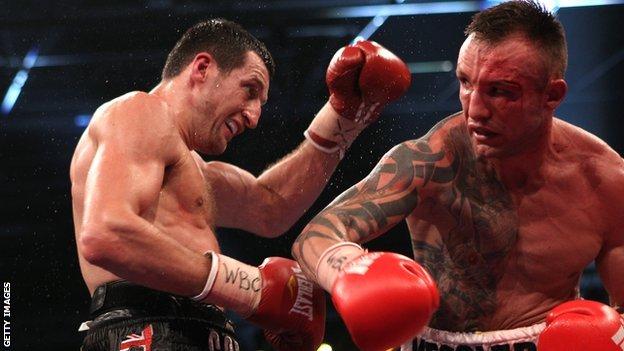 Mikkel Kessler says he would take a rematch against Britain's Carl Froch "any time, any place".

Froch defended his IBF super-middleweight crown with a third-round knockout of Yusaf Mack on Saturday, before calling out Denmark's Kessler.

Kessler inflicted the first professional defeat on Froch in 2010, taking his WBC belt in the process.

"Don't you worry, Carl. I beat you once and I will beat you again. Enjoy your belt while you have it," said Kessler.

Undisputed super-middleweight king Andre Ward is the WBA's 'super' champion at 168lb, while Kessler and Magee are fighting for the governing body's secondary belt.

"Of course I am ready to fight you again, any time, any place, especially if Andre Ward is too scared to leave his backyard."

Kessler's only defeats in a 47-fight professional career were against British legend Joe Calzaghe in 2007 and Ward in 2009.

Ward also beat Froch last December and logic would suggest Froch and Kessler fight for the right to face Ward in a rematch.

However, the winner of Kessler-Magee would become the mandatory challenger for Ward's WBA belt, while Ward is pencilled in to fight fellow American Kelly Pavlik in January.

Meanwhile, Froch is contractually obliged to meet Canada's Lucian Bute in a rematch in Montreal next spring.

But given the one-sided nature of Froch's defeat of Bute in Nottingham in May, there is a possibility Bute might not trigger the rematch clause.