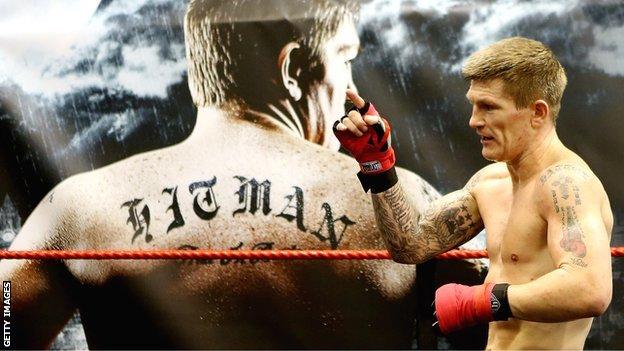 Marvin Hagler is one of the lucky ones. Hung up the gloves, said goodbye to the ring, embarked on a life more ordinary. Comfortable, ostensibly happy, plenty of interests, could do without boxing - although boxing, a watery imitation of the rich, bloody spectacle it was in his day, could do with Hagler now.

"I found that there is another life after boxing," Hagler tells BBC Sport. "I'm doing films, television, commentating. Stuff that keeps me busy and keeps my mind off the love of my life, which is boxing.

"I didn't have to return to the game just for the money or anything like that. I'd done the homework beforehand. I got ready for the day, prepared myself, so that when I retired I didn't have to go back. But even if you do what I did, boxing will always stay in your blood and that's probably why Ricky Hatton is back."

The former welterweight and middleweight world champion retired after losing to light-heavyweight king Joe Maxim in June 1952; returned January 1955; reclaimed the world middleweight crown from Carl 'Bobo' Olson in May 1956

The former welterweight world champion retired for a second time because of an eye injury after beating Kevin Howard in May 1984; returned in April 1987, claiming the world middleweight crown from Marvin Hagler in his first fight back

Hagler had a more compelling reason than most to come back. The undisputed world middleweight champion for seven years in the 1980s, he lost his crown to Sugar Ray Leonard in 1987. Hagler accused the judges of giving the title to Leonard, he accused Leonard of fighting like a girl. Some writers agreed with him, some didn't. Leonard retired rather than fight Hagler again.

Three years later, Leonard, back on the comeback trail himself, offered Hagler the rematch he so desperately wanted. Only he didn't want it, not any more. "A while ago, yeah, I wanted him so bad," said Hagler at the time. "But I'm over that. I like me now. I love me. I think I'm a very nice guy carrying myself well."

Here's Hatton, sweating like a pig in his gym in Hyde. All set for his comeback, against Vyacheslav Senchenko in Manchester on Saturday. Different era, same dilemma. Hatton didn't like himself, didn't love himself. For a time before he came out of retirement, he wasn't a very nice guy carrying himself well.

"If you saw what went on between the four walls of mine and my girlfriend Jennifer's house, how bad it got, it was unthinkable," Hatton, who struggled with depression and substance abuse after being knocked out in two rounds by Manny Pacquiao in 2009, tells BBC Sport.

"Everything was hard work. I was walking around at just under 15 stone. I went to the doctors and he told me I was a heart attack waiting to happen. I'd walk up the hill to the pub and by the time I got to the top I'd have to sit down on the bench outside: 'Get us one in, I need five minutes.'"

The humour is dark but at least there is humour. There hasn't been much in Hatton's life in recent times. "As much as he put a brave face on it, he wasn't the same Ricky as I'd known for 20 years," says his old pal Jamie Moore, the former British and European light-middleweight champion.

"There was something missing. He's different now, he's bouncing, in a really good place. Who better to inspire young kids and elders alike to turn their lives around and become a better person? Win or lose, he's done that."

Now Hatton is suspended upside down, trainer Bob Shannon rolling a medicine ball over his washboard stomach. Grinding out sit-ups, exchanging breathless quips, totally immersed in boxing. Surely this is the "something missing"?

"People keep saying, 'what about when the boxing is gone?'" he says. "'Are you going to get fat again, go back to the way you were?' But I don't think boxing saved me. I looked at my family, I got my life in order, started looking after myself, feeling happy mentally. I'd set the wheels in motion.

The general consensus is that three years off never helps anyone, but I'm trying to look at it from a different perspective: if there was a style where you could take three years off and still be relatively successful, I think it would be Ricky Hatton's

There is an important part of the Hagler story that is often excised in the retelling. For three years after the Leonard fight, Hagler wasn't a very nice guy carrying himself well. Family problems, drinking too much, "taking some of the fruits of my labour". Ring any bells? "I realised I was hurting myself and I snapped out of it," said Hagler. "But it had to take time."

Hagler, who now works for the Laureus World Sports Academy, which uses sport to effect positive social change, moved to Milan, married an Italian woman, learned the language, carved out a modest career in films and left the fight game behind. But there are different ways to proceed. George Foreman, humiliated by Muhammad Ali in 1974 and retired in 1977, found salvation in the trinity of God, boxing and grilling machines and was a world champion again in 1994.

"If I get flattened by Senchenko, it will be hard to come to terms with," says Hatton. "But I'll be able to look in the mirror and say: 'You know what, Rick, you needed to put those demons to rest. You got all that weight off, got yourself fit and gave it your best. Now be the best trainer and promoter you can be.'"

Hopefully it is that simple: sticking plaster removed, no scars beneath. "A pint from time to time," says Hatton. "Everything in moderation. If I can learn that at 34, it's come at the right time." Heartening to see Hatton fit and happy again. Wish him well and hope it lasts.