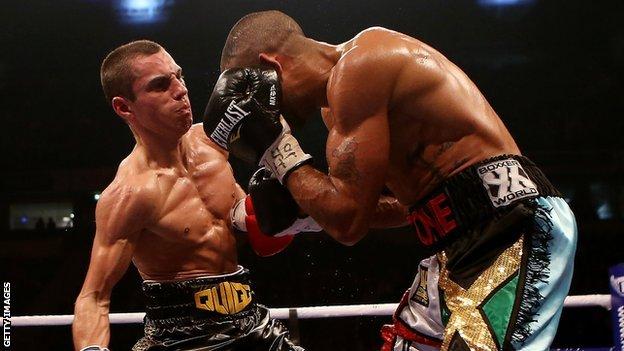 Munroe, 32, was stopped after going down twice in the sixth round in a re-match of June's technical draw.

The pair were fighting on the undercard of at the Manchester Arena.

Quigg, 24, is signed up to Hatton's promotion stable.

And he edged the early rounds against his Leicester-born opponent before raising the pace in the sixth and dropping Munroe with a sharp blow to the ribs.

Munroe picked himself up but was soon back on the canvass following a flurry of punches and the referee called for the bell.

The first bout between the two in June after Munroe following a clash of heads.

It was a third career loss for former English super bantamweight champion Munroe, but his first ever defeat by stoppage.

He suggested on Twitter after the fight that he may now consider quitting: "Going to sit down with the team and family and decide what I want to do from here.

"Think the heart's there and always will but the mind is not."