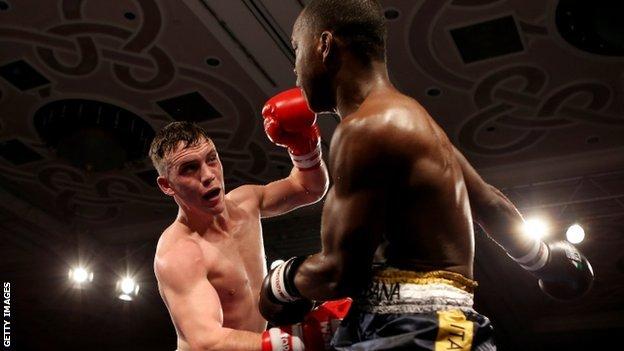 The Great Britain Lionhearts continued their impressive start in the World Series of Boxing with a 4-1 victory over reigning champions Italia Thunder.

Fred Evans, Joe Ward, Andrew Selby and Joe Joyce all won at Celtic Manor as the Lionhearts backed up their opening win over the United States.

Welshman Evans said: "I enjoyed the new format and I will only get stronger once I get back to top-level fitness."

John Joe Nevin, who like Evans won silver at London 2012, lost his bout.

How the WSB works

From two groups of six, the top four teams qualify for the quarter-finals, where they fight home and away. The winners progress to the semi-finals (home and away) and then the finals (neutral venue) in May 2013. Each bout is five three-minute rounds. The team that wins the most number of bouts wins the meet

The Irish lightweight was beaten in a split decision by 21-year-old Branimir Stankovic in the only disappointment of the evening for the British-based franchise in Newport.

Middleweight Evans, who won welterweight silver at the Olympics, defeated Michel Tavares on a split decision, while countryman Selby saw off Daniele Limone at bantamweight.

English heavyweight Joyce stopped Matteo Modugno in the fourth round after using his jab to open a cut above the experienced Italian's left eye while Ireland's light-heavyweight Ward convincingly defeated Imre Szello on points.

The third fixture in Group B will see the British Lionhearts travel to Kazakhstan to take on the Astana Arlans on 7 December.

One week later, they take on Germany Eagles at Earl's Court, London.