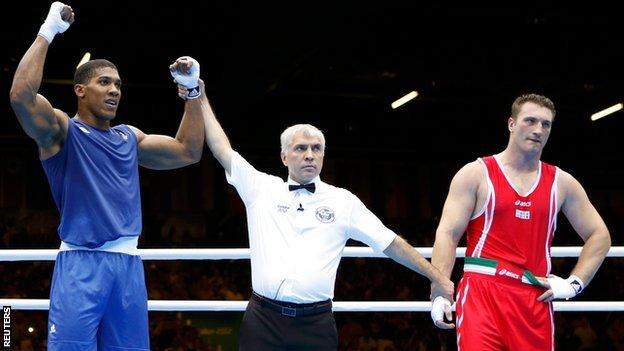 Anthony Joshua is banishing all thoughts of turning professional until he has added an amateur world title to his Olympic super-heavyweight gold.

Olympic success has often been a ticket to the pro ranks, but Joshua, 23, is determined to atone after narrowly missing out on a world title in 2011.

"But now I understand what it would mean and where it would take me."

Joshua, who only took up boxing in late 2007, beat the defending Olympic and world champion Roberto Cammarelle on his way to the final in Azerbaijan.

In the final he met local fighter Magomedrasul Majidov and lost 22-21, to the joy of the Baku crowd.

One year later at London 2012 Cammarelle was on the painful end of a tight decision, prompting deafening celebrations at London's ExCel Arena as Joshua took Olympic gold.

Joshua has not fought since claiming what was Team GB's 29th and final gold medal at London 2012, and he has missed it.

"I really want to get back in that ring. I've got a lot to prove," the Watford-born fighter said.

"My next fight will be in December: if not December, definitely January. I'm looking to keep my name hot, and keep improving.

"I'm going into everything with meaning next year."

With Kazakhstan hosting next year's championships, Frankie Gavin is still the only Briton to have won an amateur world title, but he missed his chance to add Olympic gold when he failed to make the weight before the 2008 Games. He turned pro soon after, and is now British welterweight champion.

But Gavin's story illustrates why a successful amateur's decision to turn pro is no longer as straightforward as it once was.

Joshua is currently a celebrated member of the best Olympic boxing squad in British history. He receives what amounts to a salary, and is surrounded by some of the country's best coaches and support staff at GB Boxing's base in Sheffield.

In short, British amateur boxing has been revolutionised by National Lottery funding to a degree perhaps only cycling can match.

Gavin, on the other hand, has fought just 14 professional bouts in four years and is only now anywhere near realising the potential he showed as an amateur.

There is also a new factor for Joshua to consider: the advent of the World Series of Boxing (WSB) and AIBA Pro Boxing (APB).

Joshua is not concerned about the politics, but he does appreciate the opportunity to earn the prize money that the two competitions offer, without needing to take the big step of formally turning pro.

British boxing bosses opted out of the first two editions of WSB, but have entered a 19-man squad for the third season, and the British Lionhearts have won their first two contests 4-1.

Joshua was not included in the squad when it was announced earlier this month, prompting further debate about his intentions, but he is looking forward to taking part in one of the two AIBA formats soon.

This will please both AIBA and GB Boxing, but not as much as the possibility of keeping him out of the hands of professional promoters for four more years.

"If I don't perform, well, you know how hard the qualifying is. I've got to take it step by step.

"But if I go to Rio, I'm going with pure ambition, because being able to take what I learned in London would be unbelievable.

"At the time, London was more like a national championship, because everything happened so quickly. It was like I had won four more fights and then it was the end of the season.

"It's only now that I've had time to reflect on it. Rio would be crazy, but I've got to get there first."