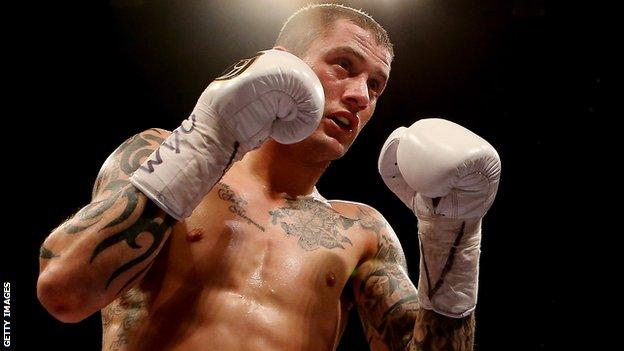 Ricky Burns will defend his WBO lightweight title against Jose Ocampo on 15 December after Liam Walsh pulled out following a road accident.

Scotland's Burns was originally due to face Walsh before he suffered muscle injuries in the accident at Marsham, Norfolk and had to be cut out of a car.

Filipino Ocampo is stepping up from super featherweight to fight Burns and is rated 14 in the world by the WBA.

Ocampo, 23, has suffered five defeats, but most of them came in his teenage years, and 12 of his 17 victories have come inside the distance.

The fight will take place at London's ExCeL and Burns's manager Alex Morrison believes Ocampo could provide a stern test for his fighter.

"Ocampo will be a tricky test for Ricky," he said. "He holds a belt in the Philippines so he has to have something about him, but I expect Ricky to show the world again the true champion that he is."

Burns swept aside Kevin Mitchell in four rounds in September.

And should he overcome Ocampo, Burns has been lined up for a unification fight with unbeaten American Adrien Broner, 28, who added to his growing reputation by securing the WBC lightweight title this month.

But while he is confident of progressing, Burns is not looking beyond the fight with Ocampo.

"Filipino fighters are as tough as they come, just look at (Manny) Pacquiao and Nonito Donaire, like the Mexicans and Africans they come to have a fight and Ocampo will do just that," he added.

"If he fights like those two, as people say he does, then I'll be in for a tough night.

"It's unfortunate that Walsh had an accident and had to pull out of our fight, but I'm a world champion and I have to deal with these changes and I'm confident I'll deal with Ocampo."