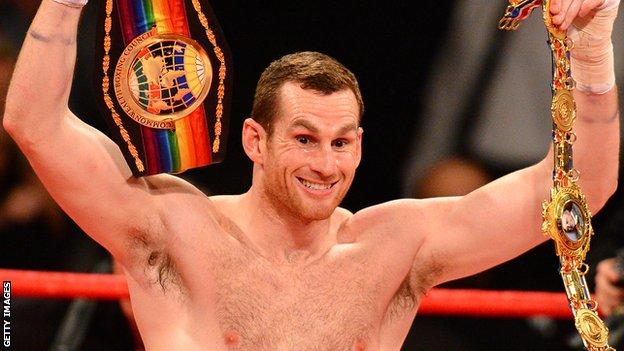 David Price hopes Dereck Chisora can regain his British licence to set up a meeting between the heavyweight duo.

Chisora, 28, had his licence withdrawn by the British Boxing Board of Control for his behaviour in Munich with Vitali Klitschko and David Haye.

"He is the logical next opponent to defend my British title against because I think Dereck would take the fight at British level," said Price.

Chisora lost his last fight after a fifth round knockout by David Haye.

Price, 29, who defends his British and Commonwealth titles against Matt Skelton in Liverpool on Saturday, concedes there is little other option if he wins this weekend.

"David Haye is a former world champion who only wants one fight, which we know about [Vitali Klitschko] and Dereck Chisora would fight for the British title, I believe," said Price.

"It would be a win-win fight because it would be a step up in class for me and the chance to win the British Lonsdale belt outright if, all being well, I beat Matt Skelton.

"It's the logical next step, without a doubt, but it's a fight that would have to be under the British Boxing Board of Control regulations because I want to win that Lonsdale belt for keeps."