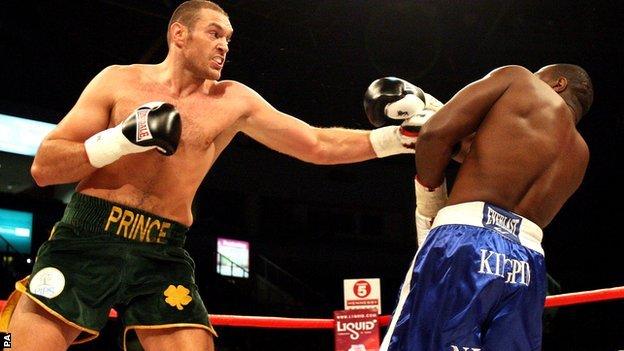 Tyson Fury moved one step closer to a world title shot after overcoming Kevin Johnson by unanimous decision after a disappointing encounter in Belfast.

Though Fury, 24, walked to the ring singing along to his entrance theme, he was able to produce little of note inside the 12 rounds.

Johnson, 33, agreed to the contest with only three weeks' notice and though obstinate never looked likely to win.

At the final bell a mixture of applause and booing echoed around Odyssey Arena.

Fury's victory in Belfast, his third of 2012, means he is one fight away from becoming mandatory challenger for the WBC heavyweight title, currently held by Vitali Klitschko.

But the contest will have done little to unnerve the veteran Ukrainian.

Johnson, who lost in 12 rounds to Klitschko in December 2009, had never in 31 fights been knocked down and that record was not threatened.

Fury was never able to shake his American opponent, and he only occasionally produced combinations to bring his fans to their feet.

Indeed, frustration got the better of the Mancunian in the seventh round when he was deducted a point for punching on the break.

After the fight, Fury nonetheless talked up his title ambitions: "Credit to Kevin - he came over here. I didn't go in there to knock him out, because I knew he was a world-class fighter who makes you miss.

"I didn't let my heart get to me, I knew that would be a war and I outboxed him."