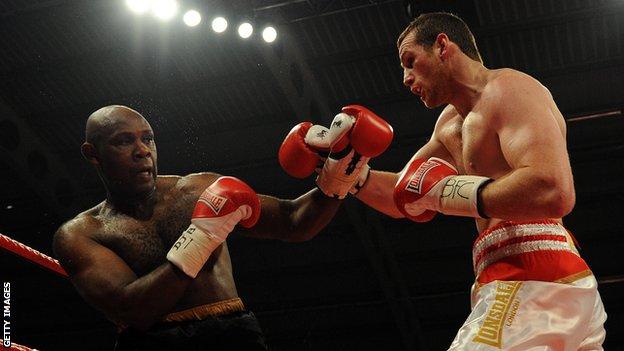 Promoter Frank Maloney says he will have "failed" if David Price is not world champion by the end of 2013.

Price defended his British and Commonwealth heavyweight titles with a second-round knockout of Matt Skelton in Liverpool on Friday.

He is already scheduled to fight former world title challenger Tony Thompson of the United States in February.

"David is head and shoulders above the domestic competition, now it's time for the world stage," said Maloney.

"One of the Klitschkos will retire some time next year and that will throw the whole heavyweight division open.

"Our plan is to be in a mandatory position to fight for a heavyweight world title when that happens, so we can control our own destiny.

"There's only one real heavyweight out there at the moment and he comes from Liverpool.

"I've been around a long time and watched a lot of heavyweights and this guy has got everything, which is why the public are falling in love with him."

Maloney, who guided Britain's Lennox Lewis to the world heavyweight crown in the 1990s, also questioned the validity of Tyson Fury's fight in Belfast on Saturday, which is being billed as a world title eliminator.

But Maloney questioned how Fury-Johnson could be an eliminator when the American is not ranked by any of the four main governing bodies.

Meanwhile, Olympic bronze medallist Price, 29, who is now unbeaten in 15 professional fights with 13 knockouts, said Thompson would be a step up into genuine world class.

Thompson, 41, has 36 wins from 39 fights, was stopped in six rounds by Wladimir Klitschko in July and knocked out by the same opponent in 2008.

"This year I've made a massive statement by mopping the domestic division up and disposing of my opponents in quick fashion, now it's time to move on to the next level."

If Price beats Thompson, a fight against former British champion Dereck Chisora could happen next summer, if Chisora manages to get his British licence back.

It was withdrawn by the British Boxing Board of Control following a public brawl with David Haye in Munich in February.