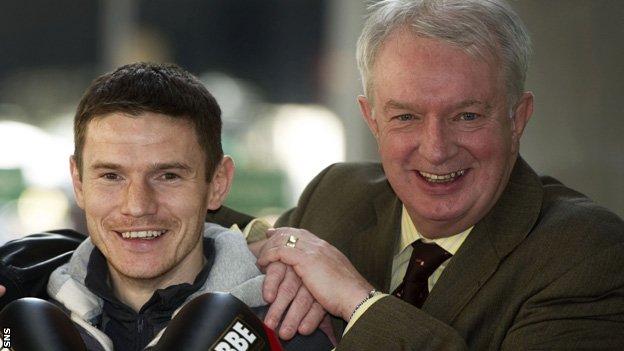 The Glasgow club will host the vacant Commonwealth light-welterweight title bout between Willie Limond and Eddie Doyle on 21 January.

The all-Glaswegian battle will also commemorate what was the club's opening and arguably most illustrious contest, the 1973 showdown between another two Scots - Ken Buchanan and Jim Watt.

Describing itself as "the home of Scottish boxing", the St Andrew's Sporting Club is a private members' club run by Gilmour and has been staging boxing bouts since the early 1970s.

Club owner Gilmour says: "It has been 40 years but people to this day still talk about the night Jim and Ken went toe to toe for 15 rounds.

"Moreover what was said about Jim and Ken back then is now being said about this fight.

"Similar to Jim Watt, Eddie is the younger and the more conventional of the two and there are those who feel this fight has come at a good time for him.

"However, others are of the opinion that Willie Limond will be too experienced, and that was being said of Ken Buchanan.

"Willie's moved up in weight and feels more comfortable and feels he has plenty to offer.

"It is testament to the St Andrew's Sporting Club that from 1973 to 2013 we are still putting on shows and fights people want to see and have divided opinions on.

"People are struggling to predict a winner, it is that close."

Limond is making his comeback after losing out on the British lightweight title last year to Manchester's Anthony Crolla.

He has mixed with higher-ranked fighters such as Erik Morales, Amir Khan and Alex Arthur.

At 33, a defeat against his younger rival will leave him with little option but to retire from the sport.

Doyle, 27, is undefeated in 12 fights with two knock-outs to his name and is stepping up in class by taking on the former Commonwealth Lightweight champion.

The winner is scheduled to fight another Scot - Aberdeen's Lee McAllister - who had to give up the title due to injury.