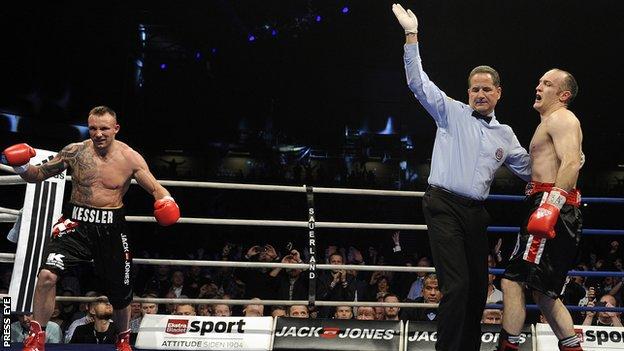 Brian Magee was stopped in the third round by Mikkel Kessler in the WBA super-middleweight fight in Denmark.

Northern Irishman Magee was making his first defence of the belt but he was no match for the hard-hitting Dane.

Magee survived two counts in the second round after being floored by body punches and another body shot ended the fight 24 seconds into the third round.

"His first shot to the body hurt me - I tried to turn it around but he is a great champion," said Magee.

He added: "I came to fight and I gave it my all, but it is hard to recover from body shots. I always knew he was a champion."

Magee became the WBA's regular champion after Andre Ward was promoted to super champion at super-middleweight.

It was a low-key first round in Herning but Magee went down early in the second round and never recovered, and referee Luis Pabon called a halt to proceedings early in the third.

Kessler was delighted with a performance which had re-established his world title credentials.

"Magee came out quickly. But when he got the one in the stomach, I just hoped he wouldn't be able to storm out again," said Kessler in front of a roaring and partisan crowd of more than 10,000 fans.

The defeat could signal the end of 37-year-old Magee's long career while Kessler secured a fifth world title.

Kessler returned to the ring last year after overcoming an eye injury that forced him to withdraw from the Super Six tournament in 2010.

The eye injury stemmed from a Super Six bout against American fighter Ward in 2009.

A rematch with England's Carl Froch is a possible next fight for Kessler.