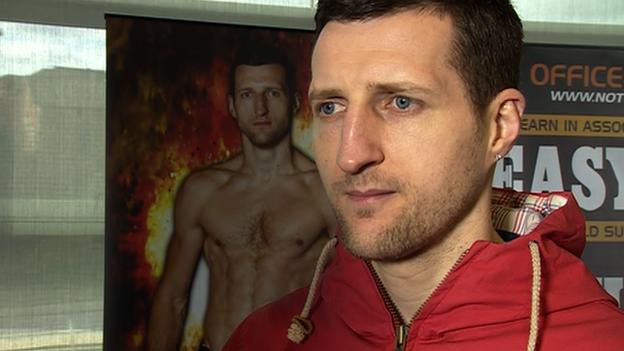 World champion Carl Froch has moved closer to another fight with Lucian Bute after the former champion said he is keen to trigger a re-match clause.

Froch beat the Canadian at the Nottingham Arena in May to win the IBF super-middleweight belt, with a re-match clause in the original contract.

I think, in his mind, he's 'dealt' with Bute and having done it so emphatically doesn't see a lot of point in doing it again. Unless he beats Bute in the same, ruthless fashion, what does he gain? Anything less will be seen as a disappointment. You wonder too about what would go through Bute's mind when the first bell goes and he looks across the ring to a man who caused him so much damage less than a year ago. In reality, Froch has revenge of his own on his mind. Kessler against Froch somewhere, anywhere, would be another amazing night

But because the fight was so one-sided, it was thought Bute may not be keen.

However he told boxingscene.com: "I know I want my revenge, no matter when. We have a solid re-match clause.

Bute added: "Froch will come to Montreal in either March or April."

Last weekend Froch, who retained his IBF super-middleweight title with an impressive stoppage of American Yusaf Mack last month, told BBC Radio Nottingham: "He's got to give us an answer by the end of this week.

"What they might say is that we have a re-match later in the year, but that's not much good to us."

The 35-year old has also been keen to face re-matches with the two fighters who have beaten him in his career - the WBC and WBA champion Andre Ward who fights Brian Magee on 8 December.

"If we're going to have the fight, we want to get him out of the way as soon as we can, because the Kessler fight is the big one," said Froch.