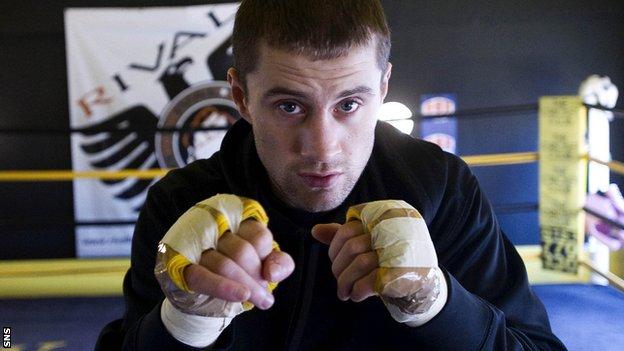 Ricky Burns will fight in London on Saturday but it is not clear if his title will be on the line now that the challenger Jose Ocampo has pulled out.

The WBO world lightweight champion was due to make the third defence of his belt against the 23-year-old Filipino, ranked 14th in the world.

Ocampo was a late stand-in for Liam Walsh, who was injured in a car crash.

Promoter Frank Warren is now trying to line up a new opponent for the 29-year-old Scot.

It is not yet known why Ocampo is unable to make the bout at the ExCel Arena in Docklands.

Burns, 29, and his trainer Billy Nelson are aiming for a unification fight with WBC champion Adrien Broner.

The Coatbridge champion's last outing was a fourth-round stoppage of Dagenham's Kevin Mitchell at Glasgow's SECC in September. It was the Scot's 20th consecutive win.

A spokesman for Warren said: "We are aware that Ocampo pulled out overnight.

"Ricky Burns, though, will still fight as planned in London on Saturday night.

"We hope to make an announcement in due course as to who his opponent will be."