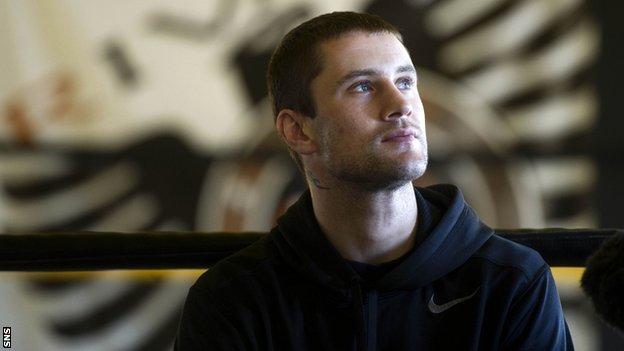 WBO world lightweight champion Ricky Burns has turned down the chance to box in a 10-round exhibition fight in London after stand-in opponent Jose Ocampo pulled out of their title bout.

Burns will receive compensation for his third title defence being called off and will next fight on 26 January.

His manager Alex Morrison told BBC Scotland: "We looked at a few names but Ricky has decided not to fight.

"It's a shame as he's trained over the last two months to defend his title."

Morrison added: "He'll now take a week off before getting back into the gym to prepare for his fight in the new year."

That bout will be staged in Glasgow or London and will be a defence of his title.

Earlier on Tuesday the Glasgow-based manager said the world champion was "sick with rage" at Filipino Ocampo's decision so close to fight night at the ExCel Arena in London's Docklands.

"These things happen in boxing," Morrison had said.

"But to be waiting to find out if he is fighting just days before the fight is a joke.

"He's been watching what he eats for two months and has had no social life at all.

Promoter Frank Warren and his team had been trying to line up a replacement for Ocampo, himself a stand-in for Burns' original opponent, Liam Walsh, who was injured in a car crash.