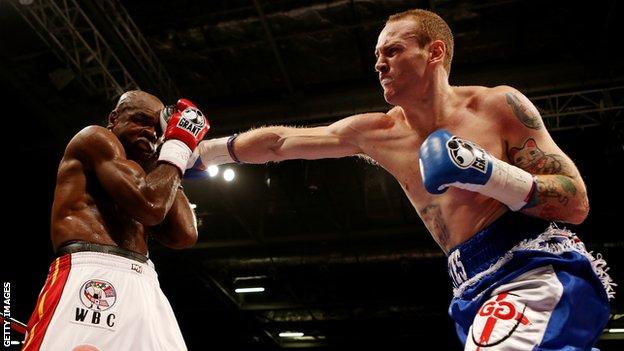 The 24-year-old Londoner scored a unanimous points victory over the 43-year-old to be unbeaten in 16 fights.

Despite landing a number of strong shots throughout the 12 rounds, he was unable to end the fight early.

Johnson has lost 18 fights but has only failed to go the distance once, against Bernard Hopkins in 1997.

Former IBF light-heavyweight champion Johnson has defeated the likes of Antonio Tarver and Roy Jones Jr along the way and only lost to Carl Froch on points when they met last year.

Groves said: "I'm very happy with it and I've learnt a lot from that fight.

"On more than one occasion I thought he was out on his feet and he wasn't. I fully understand why he's only been stopped once in 71 fights now."

An energetic Groves started quickly, taking the first round in emphatic style and it was the second round before Johnson landed any meaningful shots of his own.

That set the tone for the rest of the fight; the Londoner's shots frequently finding their mark - although danger was always lurking from the more experienced fighter's strong right.

Johnson found himself on the ropes at the end of the sixth, facing a barrage of blows from the Englishman that looked to have him in trouble, but the bell rang as Groves looked to finish him off.

Groves continued to batter Johnson for much of the seventh, keeping his opponent pinned to the ropes. But the Jamaican was somehow able to respond in the closing seconds when it had looked like he was finished.

Johnson then found a way through Groves's guard early in the eighth while landing with some strong shots in the ninth but the younger fighter was able to ride the punches and kept probing for a way through.

Groves desperately sought to end the fight early and do what Carl Froch could not. And though he knocked Johnson down in the final round, he had to wait for the judges' scores to confirm victory.

On the undercard Billy Joe Saunders, 23, won the British middleweight belt and successfully defended his Commonwealth title and against Nick Blackwell with a unanimous points decision.

Saunders is now undefeated in 16 fights after turning pro following his appearance at the 2008 Olympic Games in Beijing.