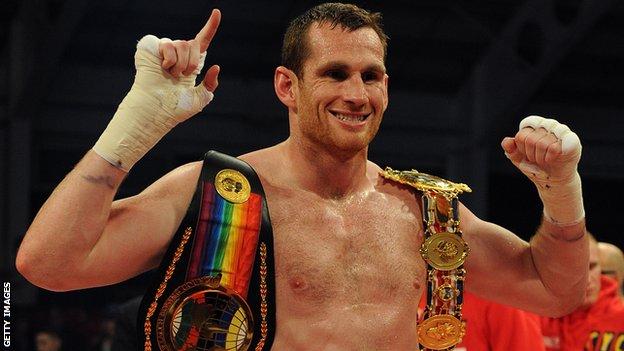 David Price will attempt to take his next step towards a world heavyweight title challenge when he faces American Tony Thompson in Liverpool next year.

The 29-year-old British and Commonwealth holder will face Thompson on 23 February after winning all four of his 2012 fights by knockout.

Thompson, 41, has challenged twice for the world title, losing to WBO champion Wladimir Klitschko in July.

"It's the right fight at the right time for David," said promoter Frank Maloney

"And one where a win will propel him even higher.

"Thompson still has ambition and I am certain that he will come to win and score a major upset."

Liverpudlian Price, an Olympic bronze medallist in 2008, is unbeaten in 15 professional fights, with 13 knockouts.

His most recent victory came with a second-round knockout of Matt Skelton in Liverpool on 30 November.

After that fight, Price indicated that he felt a fight against Thompson would mark a step up into the world-class category.

Promoter Frank Maloney said recently he will have "failed" if Price is not a world champion by the end of 2013.

Thompson has 36 wins from 39 fights, stopping 24 of his opponents, and has lost twice to Klitschko.