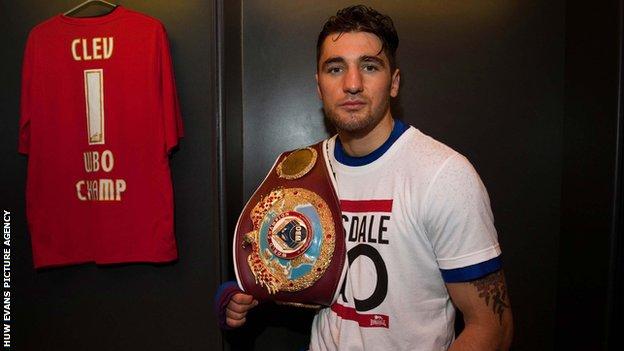 Nathan Cleverly wants to defend his WBO light-heavyweight title against Robin Krasniqi in Cardiff to make it a Welsh sporting double header in the capital.

Cleverly's title defence has been set for 16 March, the same day as Wales end their Six Nations campaign against England at the Millennium Stadium.

"The atmosphere for my last fight in Cardiff was brilliant so hopefully that can be repeated," said Cleverly, 25.

"Wales also play England that day so it could make a good double-header."

Cleverly's promoter, Frank Warren, is working on a venue to stage the bout in the UK after winning the purse bid against Krasniqi's promoter on Wednesday.

Cardiff is Cleverly's preferred choice, the scene of his third title defence against Tommy Karpency in February. Earlier that day, Wales beat England in Twickenham to clinch the Triple Crown.

"That's a bit of a coincidence and hopefully well get the same results this time," added the unbeaten Welshman.

Cleverly's unanimous points victory over American Karpency was his first fight in Cardiff since 2007.

He travelled to Los Angeles for his most recent victory, stopping American Shawn Hawk in the eight round. Unranked challenger Hawk stepped in at short notice after a planned bout with Ryan Coyne fell through.

Cleverly has since been ordered to face mandatory challenger Krasniqi or risk being stripped of his title.

The pair had been set to fight in April but Cleverly has to pull out because of illness.

"Hopefully, we will get the fight in Cardiff, but if not it will be probably in London," said Cleverly.

"We are waiting to here on that. I am quite surprised I have got the fight here in the UK.

"It would be great to have it in Wales but if we can't find a suitable venue we'll happily take it elsewhere."

Since losing two of his first three fights seven years ago, Kosovan Krasniqi has won 38 consecutive fights, stopping 14 of his opponents.

"He is a hungry fighter with a good record," said Cleverly of the German-based boxer. "He's enthusiastic so I think this will be a good fight.

"Obviously I have to win to stay unbeaten and set up the unification fights later in 2013."