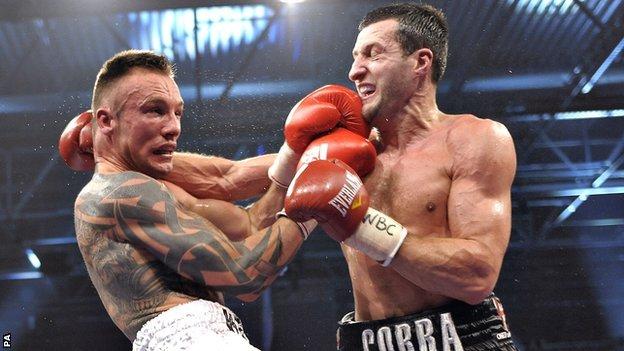 Most sports have calendars, boxing makes it up as it goes along. So while you know Novak Djokovic will play Andy Murray will play Roger Federer will play Rafael Nadal at least once in 2013, nobody really knows who is going to fight whom. Which is one of the things that makes boxing so frustrating - and compelling.

BBC Sport looks at 10 of the biggest fights that could happen in the next 12 months, while adding a disclaimer: an awful lot of them might not.

It is a measure of the paucity of talent in the heavyweight division that a bout between WBC title-holder Vitali Klitschko and Britain's former world champion Haye is pretty much the only marquee fight out there in 2013.

Haye was easily beaten by Vitali's younger brother Wladimir in 2011 - with Haye blaming a broken little toe - before a news conference bust-up with Dereck Chisora appeared to spike a proposed fight against Vitali for ever.

But Haye beat Chisora last July - this time inside the ring and without the use of a tripod - and if Vitali is after one last pay day before he immerses himself in politics full time, Haye would still bring the most readies. And in boxing, that's all that really matters.

Like Vitali, Wladimir - the WBA, IBF and WBO title holder - is running out of options, but Manchester's Fury packs a punch, makes a fair old racket and says he is up for the fight.

With the top contenders unwilling to fight each other, lest a defeat nixes a fight against either Wladimir or Vitali, Fury could conceivably land a title shot this year.

It would be a massive ask for Fury, who has had only 20 professional fights to Wladimir's 62. But while Fury's domestic rival David Price may not risk a title shot in 2013, Fury has the opportunity to become Britain's latest heavyweight world champion. An achievement, even in straitened times.

Cleverly's career has stalled in the last couple of years and he needs a match against a top quality opponent to help deliver on his earlier promise.

Dawson was last seen being given a boxing lesson by super-middleweight king Andre Ward. But Ward gives boxing lessons to everyone he meets and Dawson, coming down from 175lb, appeared dangerously weight-drained.

Cleverly defends his WBO crown against Robin Krasniqi on 16 March and says he would prefer a fight against 47-year-old legend Bernard Hopkins. Hopkins challenges IBF champion Tavoris Cloud on 9 March while Dawson defends his WBC belt against Jean Pascal on 23 March, after which the picture will be clearer.

Froch's stunning defeat of Lucian Bute last May suggested Nottingham's old warhorse has plenty left in the tank. Even Froch seemed surprised how much.

Bute had a rematch clause in his contract but, given the chastening nature of the defeat, is unlikely to trigger it. This would pave the way for a rematch with Danish veteran Kessler either this spring or summer.

Kessler outpointed Froch when they met in Denmark in 2010 and is two years younger than his 35-year-old rival. He has also won his last three fights well within the distance, making a return match difficult to predict. However, Froch and his army of fans will fancy his chances, especially in his own back yard.

Birmingham's Macklin and London's Barker were meant to fight in 2009 and again in 2010 but both prospective bouts fell through. British fight fans will hope 2013 is the year the 160lb rivals finally manage to get it on.

It is boxing's shame that Macklin, Barker and Manchester's Martin Murray have all fought for world titles in the last two years while not fighting each other. But with Murray getting a second shot in April, against Argentina's Sergio Martinez, the way is clear for a Macklin-Barker encounter.

With both men coming off the back of quick-fire wins - Macklin over Joachim Alcine in New York in September, Barker over Kerry Hope in London in December - the anticipation would be greater than ever.

Five-weight world champion Mayweather is set to meet Robert Guerrero on 4 May, with unbeaten Mexican Alvarez reportedly on the undercard against Austin Trout. This being the case, Mayweather-Alvarez looks likely in September.

Alvarez, 22, is unbeaten in 42 professional encounters and a meeting with the 35-year-old Mayweather - who is unbeaten in 43 paid bouts - could be marketed as a potential 'changing of the guard' fight.

With boxing badly in need of a new crop of superstars, it is a fight the sport could do with Alvarez winning.

Pacquiao says he has no retirement plans and with Mayweather's diary seemingly full, it looks like we could have a fifth instalment in 2013.

Despite Pacquiao winning two of their previous fights and one of them being drawn, Marquez argues he should lead the series 3-1. It looks like he will now at least get the chance to level the score in the record books.

A long shot, admittedly, but this could happen if Brook wins his world title challenge against IBF title-holder Devon Alexander on 23 February and Khan loses his next fight.

Those two eventualities would leave Brook on top of the world, Khan with nowhere else to go and the promoters and fans with a domestic grudge match on their hands: in short, Yorkshireman Brook and Lancastrian Khan don't get on.

Having lost two in a row against Lamont Peterson and Danny Garcia, Khan got his career back on track with a comfortable win over Carlos Molina in December. More realistically, Khan wins a tune-up fight in the spring or summer and then has a rematch against Garcia - if Garcia beats Zab Judah in February.

Burns is building a reputation as one of the finest boxers Scotland has produced, but his credentials would be sorely tested by classy American Broner.

Broner, 23, won the WBC belt from Antonio DeMarco in his first lightweight bout and defends it for the first time against Welshman Gavin Rees in February. Broner, who could be the greatest talent in American boxing since Mayweather, should beat Rees with plenty to spare.

Burns, 29, would be the underdog against Broner but the Coatbridge man last lost in 2007 and is improving all the time. And even if he should lose, he stands to make two or three times as much as his previous biggest pay day.

Belfast's Frampton and Bury's Quigg have been circling each other for a couple of years now but promotional conflicts and the desire from both sides to build anticipation for the fight have prevented it from happening so far.

Frampton, who is undefeated in 15 paid fights, challenges Kiko Martinez for the European title on 9 February. Meanwhile, Quigg, who is unbeaten in 26, is the mandatory challenger for Guillermo Rigondeaux's WBA belt. Rigondeaux, however, has his sights set on Nonito Donaire, the IBF and WBO champion.

That makes a Frampton-Quigg match-up a possibility at the back end of 2013, a fight that would seem to be a nailed-on domestic classic.