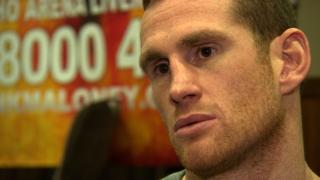 British boxer David Price says he will use his fight against American Tony Thompson to "prove he belongs at the top level".

The 29-year-old British and Commonwealth holder, who will face Thompson on 23 February in Liverpool, believes 2013 can be a "monumental year" as he looks towards a world heavyweight title challenge.

Price also discusses a potential bout against fellow Briton Tyson Fury, saying if a date can be agreed it would be "the biggest British fight in decades".