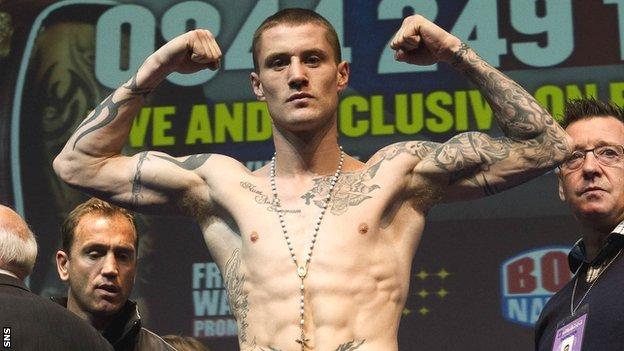 Ricky Burns will put his WBO world lightweight title on the line in a unification showdown with IBF champion Miguel Vazquez in London on 16 March.

"Miguel Vazquez is definitely one of the top boxers in the weight division and I have always said I want to fight the best," Burns told BBC Scotland.

"I think it will be one of those fights that bring out the best in me."

Coatbridge boxer Burns, 29, with 35 wins from 37 fights, has a similar record to the 26-year-old Mexican.

Slightly shorter than Burns and three years, nine months his junior, the orthodox fighter has lost only three times in 36 fights and has defended the IBF title he won against Ji-Hoon Kim in August 2010 on five occasions.

Vazquez holds a win over Breidis Prescott, the Colombian who knocked out Amir Khan in 2008, and has only lost on points to Mexican sensation Saul Alvarez (twice) and current WBO welterweight champion Timothy Bradley.

"To turn pro and go on and win a world title, I couldn't believe that," added Burns, who had a proposed title defence called off in London last month.

"Now to get a unification fight and have a second world title dangled in front of my face, these are the fights I have always wanted.

"I am going to treat this fight the same as any other. I've seen him box before but now the fight is confirmed I won't watch any footage of him at all.

"I will put everything into my training camp. Billy [Nelson, his trainer] has a few of his fights on DVD and he will pick out stuff we should be working on.

"It's going to be a cracking fight and one the fans are going to enjoy."

Burns' manager, Alex Morrison, is confident his fighter can unify the titles.

"This is the one we've wanted. It doesn't come any bigger than a unification title fight and Ricky is ready," he said.

"Vazquez has a good record but so does Ricky and we're confident he will have too much for him.

"He was very disappointed with what happened last month and is really hungry to get into the ring."

The fight will be arguably the biggest bout involving a Scot since Ken Buchanan united the lightweight division in 1971.

Asked about the possibility of achieving the same status as the Edinburgh boxer, Burns replied: "As I've said before, boxing is my job. I try not to look at things that way. I just go out there and do my thing."

Welshman Cleverly joint headlines the bill and will put his WBO light-heavyweight crown on the line against Serbia's Robert Krasniqi.

Groves will be aiming to add the vacant European super-middleweight belt to the British and Commonwealth belts he already owns when he fights Italy's Mohammad Ali Ndiaye.

And heavyweight Chisora will be hoping to get his career back on track after a defeat by David Haye in July.

However, his fight is subject to him successfully reapplying for his British boxing license. Chisora was stripped following a news conference brawl with Haye in Munich last February.