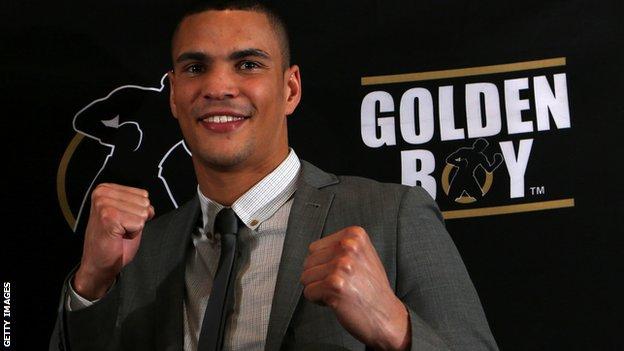 Olympic medallist Anthony Ogogo has launched his pro career by vowing to be Britain's best-ever middleweight.

He will make his professional debut in April or May.

"I want to become Britain's greatest ever middleweight boxer," he said at a London press conference. "I want to be knighted, I want to be Sir Anthony."

The move sees Ogogo join the same stable as fellow Briton Amir Khan, a silver medallist in Athens in 2004.

The Lowestoft fighter was initially thought to be lining up a first fight in February, but Golden Boy chief executive Richard Schaefer said they would be patient with his development.

The long-term plan is to have Ogogo fight eight times a year - four in the UK and four in the USA - as part of Golden Boy's plan to stage boxing shows in Britain.

"The UK market has a very special place for us. We've been involved with some of the biggest names of the last 10 years or so," he said.

"We've made a mark on the UK boxing scene but this is ground breaking, taking a young fighter and making him a crossover superstar. It's a challenge for us.

"We want him to fight regularly in the UK and the USA on some of the biggest bills, including Floyd Mayweather fights. We want to show the world if you have the right talent and charisma the sky is the limit."

Ogogo was the first member of Britain's London 2012 boxing team to announce he was turning professional, with Tom Stalker following his lead earlier this month.

He experienced a year of highs and lows in 2012, almost missing out on a place at the Olympics because of a shoulder injury and competing against a backdrop of his mother's continued recovery from a brain haemorrhage.

But Ogogo produced one of London 2012's most memorable boxing moments with an upset victory over Ukraine's world number one Ievgen Khytrov on his way to a bronze medal.

De La Hoya, himself a former Olympian, having won featherweight gold in Barcelona in 1992, claimed 10 world championships across six different weights before his retirement in 2009.

And Ogogo has said the prospect of working with his company was too good to turn down.

"I met Frank Warren and Ricky Hatton," he said. "They showed great hospitality. But when I met Richard a couple of things stuck out. One thing resounded, Richard said when he wants something he usually gets it. I liked that. So I thought I want my career in his hands.

"If I want to pack out Norwich City's ground, Carrow Road, Ipswich Town's ground Portman Road, he's the man who's going to do it."

The former European and Commonwealth silver medallist had considered competing again for gold at Rio 2016, but said he had been unable to find the motivation.

"I sat on the ring apron and thought I cannot do this for another four years. I don't want to go from boxing in the ExCeL to a school hall in front of 50 people.

"Richard told me I could be headlining shows in Vegas, East Anglia, London, Birmingham or Manchester. I am exhilarated to sign for a superpower in world boxing."