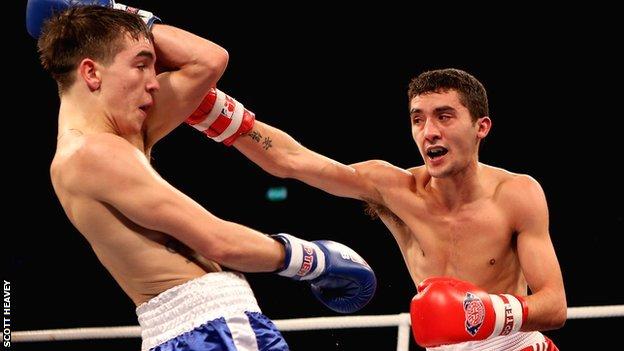 Andrew Selby won his flyweight contest against Irish rival Michael Conlan as the British Lionhearts beat the US Knockouts 5-0 at London's York Hall.

The Welshman clinched a 49-46 (twice) 50-45 verdict over Ireland's Olympic bronze medallist in a thrilling bout.

The Lionhearts are unbeaten at home in this year's World Series of Boxing.

Selby missed his chance of an Olympic medal when he was beaten by Cuban Robeisy Ramirez Carrazana in the quarter-finals in London, the same man who forced Conlan to settle for bronze.

"It's great to beat a guy who won a medal in London," said Welshman Selby.

"I beat him by a point in the Worlds in 2011 so he had unfinished business with me tonight, but I proved myself and came out on top."

Estonian middleweight Kaupo Arro got the Lionhearts off to a winning start by scoring a second-round technical decision over American Jeffrey Camp while London heavyweight Joe Joyce beat Avery Gibson of the United States on points.