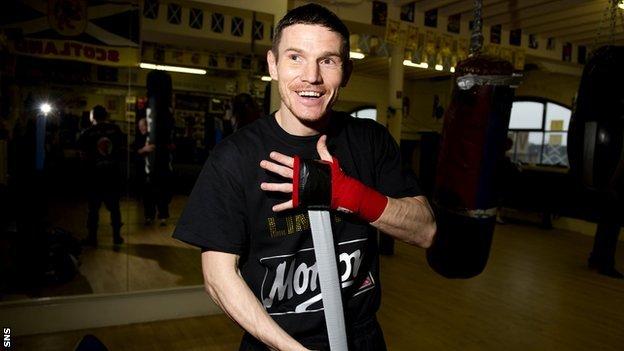 Willie Limond and Eddie Doyle believe they have made the best possible preparations for their Commonwealth light-welterweight title fight at the St Andrew's Sporting Club on Monday.

The Glasgow club will mark its 40th anniversary when the two Scots go toe-to-toe for the vacant crown.

"To be a two-weight Commonwealth champion would be brilliant," said Limond, 33, who lost the lightweight version to Amir Khan in 2007.

Doyle is unbeaten in 12 pro fights.

The Glenboig boxer is six years younger than Glasgow's Limond and thinks that, combined with his stamina, could be a factor in the bout at the city's Radisson Blu hotel.

"I've got a great engine. I shouldn't have a problem going 12 rounds," said Doyle, who has never gone beyond eight rounds.

"He is a great boxer, he is very experienced, I can't take anything away from him - but my engine, my age, his age, that could hopefully play a part in the fight."

Six hundred fans will pack into the hotel to watch the bout, which will be refereed by Victor Loughlin, almost exactly 40 years after Jim Watt and Ken Buchanan contested the St Andrew's Sporting Club's first bout in a now-classic British lightweight title encounter.

Doyle cannot wait to sample the atmosphere while Limond, who fought in front of 56,000 fight fans when he lost to Erik Morales in Mexico City in September 2010, is also relishing the thought of the occasion.

"I've got myself in the best possible shape that I think I can get in and I believe that I'm going to put on a good performance.

"I've moved up five pounds. I am more comfortable now. I was struggling to make the [lightweight] 9st 9lb mark so it makes it that bit easier to make the weight.

"I trained on Christmas Day and I did a 10-mile run on New Year's Day."

Limond admits he has mulled over what limited options there might be for him in the sport should he lose to the younger man.

However, while acknowledging Doyle's bravery and fitness, he maintains his speed, power and movement will help him lift the title and put off talk of retirement.

And he added: "We've had brilliant sparring. For strength we had Craig Kelly, who is a Scottish light middleweight, Jordan McCrory for speed and Antony Crolla [who beat him at Ravenscraig just over a year ago] for skill.

"Me and Anthony are still mates. We sparred for a few days and it was brilliant."

Doyle says he has found even greater motivation to train hard after becoming a father to a baby girl.

And he is desperate to become Commonwealth champion as a thank-you to trainer John McDermott, his 74-year-old trainer, who was a 1962 Commonwealth gold medallist and Scotland coach, who runs Blantyre Miners' Welfare Amateur Boxing Club.

"I've trained all my life for this and now it has finally come I am ready and raring to go," said Doyle, who, like Limond, gave up a promising football career to concentrate on boxing.

McDermott, who trained Pat Clinton to a world title, describes Doyle as "the best" to work with.

"He has a great temperament. He is never angry. You get him the same way every time. We have really worked hard on this fight," said the coach.