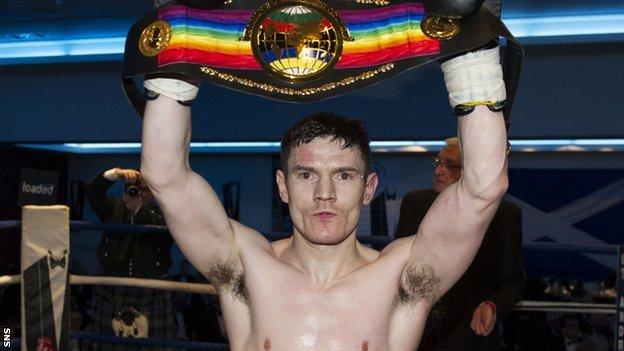 Willie Limond produced a torrent of telling punches in a 116-second demolition of Eddie Doyle to win the vacant Commonwealth light-welterweight title in his home city of Glasgow.

The 33-year-old came racing out of his corner at the opening bell and launched into an astonishing attack on Doyle, six years his junior.

Glenboig's Doyle was first knocked down by a left-right combination.

He got up bravely after a second knock-down, but the referee ended the fight.

Limond was unrecognisable from the gaunt, hesitant fighter who was in their British lightweight title fight in Ravenscraig in November 2011.

Having moved up to the 10st category, Limond says he feels much more comfortable and does not miss the power-sapping weight-loss regime he had to endure in recent years.

"A lot of people thought I was written off and they could have been forgiven for thinking that," said Limond afterwards.

"It was good to explode there. I felt I was going to erupt all day.

"The tactic was to land bombs early doors. I feel strong at this weight.

"I knew Eddie was going to come for it. I said to myself earlier, 'this isn't going by one round'. I just had a funny feeling.

"That's the first in a long time I just felt myself and I was expressing in it there.

Doyle, who entered the ring with 12 wins from as many bouts, was hit by two Limond punches to the head within a few seconds.

He simply had no time to recover his senses or the situation as the veteran threw left hooks and chopping rights to further bewilder his shell-shocked opponent.

Having been put through his paces by the hugely experienced trainer John McDermott, dazed Doyle must have wondered how their preparations could so quickly have been blown away.

He clambered to his feet after first being sent sprawling within a minute and then hammered a left into the face of Limond, who barely seemed to notice.

In under two minutes of the first round Limond had battered Doyle with another left hook to put him on his backside again.

Doyle was back on his feet at the count of five and, though he was desperate to continue, referee Victor Loughlin decided he was in no state to defend himself.

It is the second time Limond has held a Commonwealth title - he was the champion at lightweight in 2007 but lost to Amir Khan in London that year.

For Doyle, this was a tough lesson, but time is on his side.

McDermott says he is a dream to train and the 74-year-old former Commonwealth gold medallist will surely be a key figure in rebuilding his confidence after such a shattering end to his title hopes.

A possible defence for Limond later in the year could be against Aberdeen's Lee McAllister, who vacated the title last year and who was at ringside on Monday night.

"It was a good display from Willie, he showed his experience," said 30-year-old McAllister.

"I think Eddie was nervous. He got caught cold but he will come back.

"Willie is only holding on to my title for a little while before I get it back off him.

"It will be a good fight between me and Willie but there is only one victor, and it's me."

On the undercard, Inverness heavyweight Gary Cornish beat Tamas Bajzath from Budapest on points to take his record to 12 wins on the trot.